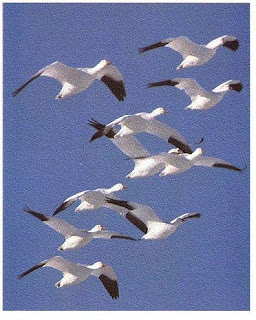 Snow Geese on Fir Island, near the house where I live. It was cold and windy this morning -- too rough for a walk with the dog, but I loaded firewood onto the front porch, where it's handy to the stove. Then I raked out some debris on the driveway -- just to neaten it up and get my blood flowing.

I continued to work on my embroidered sweater. It's an old brown sweater that I used for landscaping last spring, but I have recycled it into a wearable work of art, with embroidered designs front and back and on the sleeves. The theme is the valuation of old things -- old sweaters and such -- we don't throw them away.

The designs on the sweater are all about the Weather -- lightning, rainfall, the moon, the sun, snowflakes, and then a twisting vine growing up the right sleeve.

Today I completed the moon on the front of the sweater and then I did what I should have done before I started this project -- namely to wash the sweater and get it clean. Anyway, it wasn't too late to soak it in hot water in the kitchen sink and give it a gentle hand washing and rinse. Then I draped it over the railing on the back porch -- it should be mostly dry by when I come home this evening. Then I'll lay it on a towel for the final drying.
Posted by Fred Owens at 2:33 PM 1 comment:

I came home from work last night at 11:30 p.m., and made some herb tea with honey. I brought the steaming cup into bed with me and read a book, falling asleep by 12:30.

It wasn't too cold, but in the middle of the night I deployed my extra wool blanket. Otherwise I slept pretty good and woke up at 8:30, well after daylight. I reached out from under the covers and switched on the space heater to get some warmth into the room, and then ten minutes later I got up and put on my extra-thick hooded sweatshirt and my thickest wool socks.

Not really warm, but getting there, I padded into the kitchen and fixed a pot of coffee. I use an old-fashioned percolator that makes only two cups. I went outside to look at the day -- rainy, but not too cold, and not too windy -- easier weather.

By the time the coffee was ready, the space heater had gotten my bedroom a little warm, so I sat in my deck chair, which has the Lone Star flag emblazoned on the back of it -- a souvenir of my year in Texas.

I got comfortable in the chair with the hot coffee and switched on the radio. I tried Air America, but that morning woman talks too fast, so I switched over to Laura Ingraham on 1300 AM, she's a conservative. I like the sound of her voice, which is the most important thing, especially first thing in the morning. I forget what she was talking about.

I wrote about three sentences in my journal, but I realized I had little to say, so I put that down and picked up my embroidery hoop. I continued to work on an 8-inch hoop of embroidery I am making for a Christmas gift. Embroidery is a new hobby of mine and it's very relaxing -- it keeps my fingers and my mind busy without actually having to think.

Thinking is good, but thinking gets bad when you go over the same ground again and again, so it's better for me to keep up with my stitches.

My next project was to take Patti's dog for a walk. Patti is my roommate and landlady. She has a very fine dog named Pharoah, a female, just the right size, not too big and not too small, a lively, friendly dog with very good manners.

So I bundled up and headed out the door with Pharoah jumping along side me. By now it was raining hard, and a walk wouldn't do, but fortunately we had an outdoor project -- stacking the wood.

The wood guy came yesterday and dumped a cord onto the pavement under the carport, so I began to stack it up, and there was some good exercise. Pretty soon I took off my jacket, but I reminded myself to work slowly.

I got about one-third of the pile stacked up when Patti came out and said she didn't feel too good and couldn't help and said I had probably done enough for one day, so I said fine.

I haven't lived in a house with wood heat in 17 years -- since we had the old farm on Martin Road in Mount Vernon.

Wood heat makes a project out of keeping warm -- it’s something you do yourself, rather than flip a switch and pay a bill -- so the work is satisfying and the heat is a pleasure, especially in the evening, when it gets dark outside and it starts to get really toasty in the living room.

But the other thing about Fir Island is the birds, the huge flocks of snow geese that lie in pastures on both sides of the house. I go out and watch them. They sit in the field -- must be four or five thousand of them, I can’t tell -- they are pure white except for the black tips on their wings, and their necks are shorter than the trumpeter swans that also winter around here.

Honking and honking, talking about who knows what, always chattering, even in the night-time, they keep up a hubble-bubble squawking of a high-pitched nature -- maybe some coyote out working the edge of the flock in the deep of night makes them nervous.

The hunters are out in the early dawn. They have elaborate regulations about where and how to hunt the snow geese. All I know is hearing the muffled pop-pop-pop of their shotguns, and sometimes out walking I come across a pile of feathers that once was a goose, but somebody got it -- the coyote or the hunter.

In back of the house is a slough with beavers and otters. They have a slinky trail that comes up from the slough and slithers into the raspberry patch. It’s probably a beaver because of the chewing marks on the tree by the slough. I don’t know. If I keep going out there I might see it.

On top of it all is the eagles; two of them, one bald-headed, and the other is a juvenile with black feathers mottled with white. They use the cottonwood trees in back of the house for a roost. You can see them there almost anytime of day, they just come around and perch there for a while and then go somewhere else.

Otherwise, the traffic on Fir Island Road streams by on a steady basis, so many thousands of cars every day. It’s a fairly busy road, but you don’t see much from the car. This I have learned, because for many years I have driven across Fir Island on my way to somewhere else, but I never really knew the place until now that I live there and get out walking.
Posted by Fred Owens at 1:57 PM 1 comment:

It used to be all salt marsh and fir trees. The trees were logged, the land was diked, and it now makes for rich farmland with an abundance of birdlife -- although no more fir trees -- just cabbage fields, and pea fields, and wheat.

It's a windy place, the wind comes right off the bay with no trees or hills to slow it down. Or else it comes straight up from the south -- blowing strongly, but the south wind is warm.

Today it's not very windy, but a light snow is falling. We hadn't started a fire yet in the old farmhouse, so I headed into LaConner, to get on my laptop at the bookstore. I got a nice latte and I'm sitting in this soft chair by a gas fireplace.

The day has been pretty low key.
Posted by Fred Owens at 2:42 PM 1 comment: