This story is so wrong, and on so many levels, that I must write about it.

The young woman was sexually assaulted having passed out from drink. The assailants took photos of this crime and broadcast them on social media. Subsequently, the young woman committed suicide.

Can it be proven that her suicide directly resulted from the shame she felt about having these awful images displayed? That's a legal question.

But I would say very likely. If the photos had not been broadcast around her high school, she would not have taken her life.

This is what the news story seems to emphasize -- and this is a very wrong story, very wrong.

What else do I know? The story says the assailants were three 16-year-old-old boys. And what do we know about 16-year-old boys? They are dumber than a cow, and they are about four to five times hornier than the average adult male who is reading this newsletter. They are plug stupid and they easily go out of control.

Did anyone ever tell these boys that it was wrong, that you are not supposed to touch, disrobe, or fondle a female friend (let's assume they were friends) if she is passed-out drunk? And not take photos while you're doing this, and not share these photos on Facebook. Did anybody tell them anything?

I'm going to dig into this a little further -- to discuss the matter that didn't seem to get into the news story about this crime and death.

Not just drunk, but passed-out drunk.

I can think of numerous bad and dangerous outcomes in this scenario. Suicide by Facebook photo is only one horrible possibility, but there are many ways this party ends badly.

Is my thinking clear here? You take away the booze and there's no assault, no photos, and no suicide.

Teenagers are capable of hurting themselves and others even under ideal circumstances.

But still, we should strive to keep them and guard them and protect them.

We need to be watching over them. We need to not only tell them what to do and not do, we need to be present, and not leave them alone in large groups for long periods of time.

Being watched and being instructed, they are less likely to get drunk and commit the crime of sexual assault.

To me, the sexting, the photos and the social media angle is secondary, yes, worse, but let's focus on the crime -- which was the sexual assault, and what led up to it and how to prevent it from happening again.

I recommend hypocrisy. It doesn't matter what you did when you were that age. If it's wrong, tell them it's wrong.

And finally, we should all realize that adolescence is a dangerous age and always will be.

Too Serious. I'm not going to be getting too serious on you. The next issue promises to be completely off the wall -- a testimony to the anarchy of springtime, an ode to James Joyce and all the Irish tenors.

Ted Talks. I expect to be giving a TED talk pretty soon. I haven't made the deal yet, but it seems like the right venue. I considered the MOTH for telling stories, but I actually don't care for that format.

Purging the Mailing Newsletter. If you have received this week's newsletter, you have survived the purge -- 75 other people were deleted.... My hope is to send the letter only to people who actually want to read it. The typical Frog Hospital reader does not read every word of every issue -- that's not required -- but they do seem to enjoy the mix.

Most of you do not pay for a subscription. But some of you do pay and that makes it work for everyone.

After you pay the rent or the mortgage, after you've bought the groceries, after you've put a little money away for your children's and grandchildren's education -- after taking care of these necessaries -- then why not send a $25 check to Frog Hospital.

Subscriptions. Your subscription money keeps the editor from getting cranky and self-righteous. Your check for $25 helps me maintain a degree of detachment. I do not support a cause on these pages. And I am truly grateful. Please go to PayPal at the Frog Hospital blog and contribute $25.

Thank you very much,

Facebook. Some of best stuff is on Facebook. Go to my page, Fred Owens, and friend me
Posted by Fred Owens at 5:19 PM 3 comments: 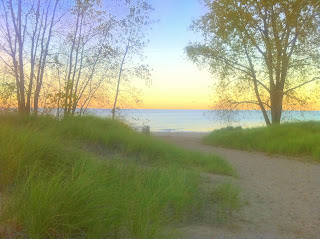 Wilmette Beach on Lake Michigan, some miles north of Chicago. It's a very big lake -- you can't see the other side, 60 miles away. Here you see the faint colors of sunrise, and it's so wonderfully calm. No tides, no currents -- but still, deep waters, and very clean as well. For drinking water in Chicago, they just run a large pipe out into the middle of the lake and bring it in for drinking -- doesn't need much in the way of filtrating or cleaning...... Sweet, fresh water....... Lots of fish too -- whitefish, lake trout, smelt, salmon, bass, crappies, and perch......Sea gulls too.

We used to go to the beach every day in the summer when we were kids. Hot skies, hot sand, cold water. Diving underwater, swimming in the lake. No finer beach anywhere.