The Woman who drives a Yellow Car 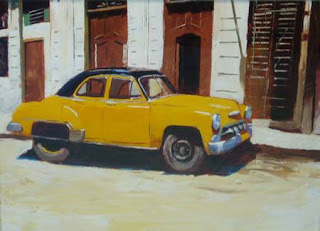 I had lunch with the Woman who drives a Yellow Car. I gave her a very nice piece of driftwood and she liked it. We discussed art, particularly the life and works of Kevin Paul and Charlie Krafft.

Kevin Paul is not well and could use plenty of support at this time -- he has been such a fine friend and such a wonderful sculptor. Charlie has the intention of making a visit of several days duration to the Skagit Valley. He has been living in a small house/studio on Beacon Hill for the past 11 years. Charlie is renowned as the former mayor of Fishtown and should provide a much needed stimulus to our local art world.
Posted by Fred Owens at 3:39 PM No comments:

I have not written a word in months -- what a relief. Instead, I have been doing embroidery, which utilizes the ten fingers quite well, without the bother of publishing and facing a hostile world. Instead I have a selection of my fine needlework to enjoy.

A message to those many people who have responded to a previous post titled "Christopher Columbus was a Very Bad Man." Apparently, you read it literally, which is your business, but I wrote it as a satire, a send-up of revisionist history.

My own view of Christopher Columbus is traditional. I admire the man and what he did. I subscribe to the view of Samuel Elliot Morrison in his biography of Columbus.
Posted by Fred Owens at 3:34 PM No comments: