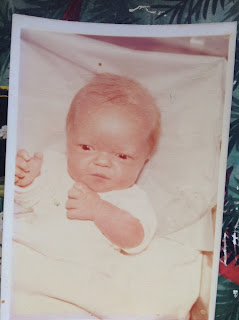 We are pregnant. People actually say this. No, we are not pregnant. I can offer evidence. In 1977 one Susan Owens was pregnant and one Fred Owens was not pregnant. Nothing could be more obvious. I saw it with blinding clarity every day. Her whole life and body was erupting into this very unusual situation and changing every day in ways that made no sense to me at all.
Well, it made some sense -- she could tell me in specific terms, and I might read some literature on the topic, about varicose veins and stretch marks and weight gain. Friends and relatives might advise me. But nothing was happening with me.
And then comes the very awful part. This was 1977 and the idea was just getting started..... the idea that the father ought to be included in the birthing process. He cannot actually do anything or help in any way or be the least be useful -- ah, but he can be "present."
Actually I had a job, which is different than being present. It was a crummy job, but it paid the rent. I could have gone to work and told the boss, "Look, I'm not going to do anything today, but I will be present." He wouldn’t understand that kind of thing.
It was still dark in the morning when I left the apartment at 121 Clyde St., walking over brilliant, crunching snow, a half-block to Howard Street, then turning left, going under the Northwestern RR tracks, and coming to Chicago Ave.
January in Chicago is very cold. I would get to the corner of Howard and Chicago and wait for the bus, freezing, slapping my hands, jumping up and down. But I didn't care about that because the bus was always on time and the lights were bright inside the bus, and the bus driver wore only a sweater because it was so blissfully warm in there. The heat embraced you like a mother as you stepped aboard.
It was a 15-minute ride to where I got off and walked over to the office and warehouse of General Printing. That was my job -- assistant shipping clerk -- the place where I went every day. I was doing something, and not being "present." Actually I was quite present in the sense of being mindful of the people and the boxes of paper, and the smell of the ink, and the clatter of the printing presses.
Meanwhile she's back there at the apartment on 121 Clyde St., stitching baby quilts and growing a baby. I'm loading large stacks of paper on a pallet jack to feed the printing presses. I knew I had the easy part, but I didn't know much more than that.

This was the ad I placed in the Evanston Review. "Man Wants Work" was my original composition. You would be amazed at how quickly you get hired with an ad like this, if you don't care what the work is or how much you get paid..... Right away they called me from General Printing. This was the winter of 1976-77. General Printing hired me as the assistant shipping clerk. My wife was pregnant. This was my first job in the new era. I was now Married with Children and about to achieve Fatherhood. I should have set me sights higher. But I had no plan, no dream, no hope and no ambition. We had been two months living at my mother's house -- I guess that was the goal. Man Wants Work -- so that he can make enough money to rent an apartment.
They ran three big offset printers. I was the guy who brought large stacks of paper from back in the warehouse, wheeling loads on the pallet jack up to the printers. I hated to think how much money those printers made -- union jobs. But you had to know somebody to get into that union. I didn't know anybody. I was thirty years old. I was already past my prime, if I had known that. If you're willing to take the job of assistant shipping clerk, then that is what you're good for. You are thirty, you are no longer on the career track.
I didn't know that. I was only Man Wants Work. The Magical Mystery Tour was over. I was not living in a teepee on a commune in California. I was renting an apartment on 121 Clyde St. in Evanston, Illinois, only miles from where I grew up, miles from where I left home and never came back. Except I did come back.
I could have blamed my wife or my mother. They were at hand and not innocent. But who wants to hear that? I decided to blame God. He can take the abuse. Blame God for taking my father away from me. I wished he had been alive in 1977, just when I was ready to actually listen to him. Dad, what should I do?
But I wasn't lost, I knew where I was. I was in Evanston. I was born in Evanston -- the leafy trees, the tall towering oaks and elms that shaded brick streets in summer. The Lake. Lake Michigan, but we always called it the Lake, so big and calm in summer, so rough and icy in winter.
At least I knew where I was, and Eugene could be born here. It would be all right.