By Fred Owens
I met Moshe Waldoks 25 years ago. He was not a real rabbi -- they said. But he could substitute for Rabbi Holcer at the Purimspiel. This was at Temple Beth Shalom in Cambridge, Massachusetts in 1992.
A raucous crowd was at that event, with Moshe Waldoks astride the Bimah, leading the chants in Hebrew and wearing a yellow hard hat with a propeller on top. You had to be there. It was fun.
One thing led to another and I became his gardener, where he lived in Brookline. Moshe was just doing me a favor. He didn't care about plants. If I pulled out a few weeds, that was enough.
We stood and talked in the yard when I gave him my strong pitch that I was just the fellow to trim his yew hedge. You really need to trim these yews before they get too overgrown, I told him.
Moshe didn't care. Shrubbery was not part of his world. I was only hoping.
So he invited me in for lunch and that's when he served me the gefilte fish. I told you about that last week. I didn't like it. It didn't taste good.
So I wrote about that and three Jewish people wrote back to me and explained that I had not been served really good and proper gefilte fish. That you need beet horseradish to bring the gefilte fish alive and you need matzoh crackers.
Maybe I should try it again. But who has gefilte fish in Santa Barbara? I don't know the Jews around here. I could go to the Jewish Community Center and introduce myself and state my request. That I write a blog called Frog Hospital and that one time, 25 years ago in Brookline, Massachusetts, a man named Moshe Waldoks -- not yet a real rabbi -- had offered me some gefilte fish for lunch and I didn't like it.
But I think maybe I should try it again, I would say to the receptionist. So maybe you can help me find a local Jew who can serve me a nice batch of it. Give me a do over.
I'm explaining this to the receptionist at the Jewish Community Center in Santa Barbara. "Another gefilte fish goy," she utters under her breath and she presses the hidden security button.
But I want to tell her -- I have people, real people, who can help me -- like Peter Goldfarb in Mount Vernon, Washington, and like Harvey Blume in Cambridge, Massachusetts. Both real Jews and they will vouch for me. I can give you their contact information.
They would say, "This man is okay. Strange, but okay. Let him try the gefilte fish one more time. He has his reasons."
So maybe I should call Moshe Waldoks. He's a real rabbi now and he has own congregation in Brookline, Temple Beth Zion.

I spent a lot of time with Kwami Taha before I moved away from LaConner. We used to hang out at Cafe Culture and then drive to Popeye's chicken for lunch. Then back to his townhouse on Maple Street. He used to tell stories, like the time he was in the army in Korea and he refused to work on his birthday so he got arrested for that. Then he refused to work on his mother's birthday. He told the story differently every time.
Kwami was maybe ten years older than me. He was a tall man, broad shouldered and rangy. He grew up in Harlem. His parents owned the premier barbershop in Harlem with 12 chairs. All the stars and jazz players went there and Kwami said his parents once took him to the Cotton Club to hear Duke Ellington. Did you know Thelonius Monk? Sure I knew him. Dinah Washington?
Yeah, sure. I knew her.
After the army Kwami  became involved and became  a lieutenant of Malcolm X in the Black Power Movement. After the assassination of Malcolm X Kwami was cast adrift and forsaken by the established civil rights movement.
With nowhere else to go he became a Republican. This is a long story. I will keep it short. Kwami was a teacher. He had a lovely wife and fine children. He moved to LaConner for his retirement years and told his stories. Many stories he told and never the same way twice. He used to say he had the franchise, being the only black man in LaConner.
One crisis stands out, the election of Barack Obama in 2008. Kwami had never voted for a Democrat in his life until 2008. But his family and children wanted him to vote for Obama. I, a younger man with a very different experience, was called on by him to help make this difficult decision.
I said brother you're going to be sleeping on the couch for a long time unless you vote for Obama, so he did vote for Obama.
Otherwise what I have written here is based entirely on conversations I had with him and my memory may be faulty.

Anita Dominocielo-Ho is the President of our Kiwanis Club in Santa Barbara. The photo shows her giving an award or scholarship to a young woman. That's one of the things we do at Kiwanis.
I asked her to tell her life, and here it is:
I was born in Colon, Pan 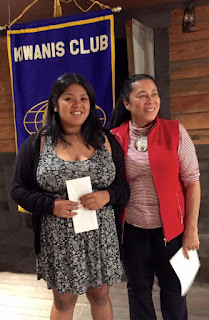 ​ama, my father's name was Ho Chi Pui, who was born in Canton China. I became an American as a child and grew up as an Army brat with my stepfather and family. I moved every 4 years until I was 24 years old,  I came to Santa Barbara in 1968, found my home town and have never moved since. I came as a widow when my first husband was killed in Vietnam, his last wish was that I come here. Santa Barbara has been good to me. I have had an amazing life here, loving my career working with people, now happily married for 32 years and have the best son one could ever ask for. My life as a Kiwanian is central to my life.  As a Kiwanian, I achieve things most people find valuable in life like friends, family and a sense of community.

So That's It
I seem to know a variety of people -- a rabbi from Massachusetts, a teacher form Harlem and a community leader with roots in Panama.
These are important people. It's people like Moshe and Kwami and Anita that make our country great and good.

It's still raining in Santa Barbara. I can't do any garden work, and besides that my right leg is giving me troubles.