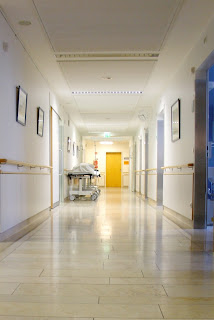 I really like this photo. It looks like a hospital. But the trend now is to make hospitals -- rooms, corridors, entrances, waiting rooms -- look like something else, something homey and warm, something that doesn't look like where a sick person would go.

"It's not about sickness, it's about wellness! So let's bring in some paintings and potted plants and softly bubbling aquariums."

That's okay. I'm down with this new attitude. We have soft colors and carpeted corridors at the hospital where I work, softer lines, and so forth. It doesn't look anything like what you see in this photo.

But the image in this photo is so strong -- of the old-style hospital, the long straight corridor, the antiseptic, heavenly glow of the flouresecent lights, the shining floor clean enough to eat off, and that yellow door down at the end -- What's going on behind that door?
Posted by Fred Owens at 10:06 AM