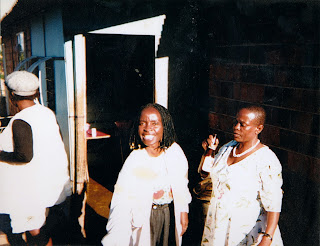 I left Nyanga, walking alone, and traveled to Matopos, where the most ancient granite stones form fantastic shapes. The African woman emerged from the very earth -- or maybe it was that I met her at the Palace Hotel in nearby Bulawayo over a beer -- but I like the version where she emerges from the earth better.

We talked about her life and her family. I told her I was single -- divorced. She asked, not innocently, "Who cooks for you?" What little resistance I had disappeared.............I began courting her. I rented a car to take her to fountains and night clubs. She brought Her Aunt Janet and her Aunt Winnie on these dates. The aunties rode in the back seat.... I bought them plenty of beer and chicken and won their approval ....... We were properly and legally married some months later -- renting a house in suburban Bulawayo.

It was a good home, very strong and solid. The cement walls and tile roof kept us cool even on the hottest days. The front yard had an enormous pepper tree blessing us with shade. I built an herb garden in the back yard. I worked as a volunteer at a nearby nature preserve..

My wife's relatives constantly besieged us. They would sit for hours in our living room, waiting for food, leaving when they were fed and given bus fare home .... I learned the African word for "son-in-law" is Umkunyani, meaning "he who pays for everything.”

Mr. and Mr. Jones were coloured people who lived next door and fairly prosperous. They said we must move away or the relatives would consume everything..... And I was getting too homesick, so I asked Zodwa, my wife, "Do you want to go to America?" -- I had never mentioned this possibility before, but I think all the time her answer would have been yes.
Posted by Fred Owens at 2:45 PM