Home, Home, Where is Home? 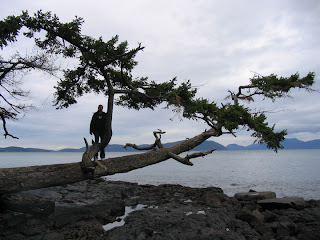 
We came back to LaConner – or, rather, I came back. Precious arrived in her American debut. She spoke Ndebele as a first language, plus a bit of Shona, Tonga, Tswana, and Chewa from neighboring tribes, plus the English which she learned in government school. She arrived with packets of herbs and secret things which I still won’t talk about.

I never could understand her – we managed to get by with a very limited vocabulary. Her English never improved and she had no patience to teach me the African tongue.

We bought a house at 410 Caledonia Street, on the South side of LaConner. It’s such a tiny village, but there is still a wrong side of town, and that’s where we lived.

I didn’t love that house. If I did love it, I would probably still have it. But it was too low, a ranch house, built on a cement slab, and lower than all the surrounding houses – too low.

The one thing I did right was paint it yellow. Yellow is a wonderful color for a house.

Otherwise, nothing went right. She was beautiful and graceful, but we made no sense as a couple -- not to ourselves or to other people.

We lived in that house for six years. Then she left. I was glad she left because she drank too much beer and I was tired of it. But it was lonely in the house after she was gone.

And I wanted to get shut of her business, so we sold the house and divied up the money and got a divorce. I was no longer obligated to her in any way.

I let it go. Nice furniture too -- gone. Everything was gone except for the content of 12 storage bins – about one pick-up load of worldly goods – mostly memorabilia like my Boy Scout merit badges and a crystal bowl from my mother’s house – stuff like that. I stored these bins in a friend’s garage and I went camping.

It was June, 2004. I went to Washington Park in Anacortes to camp, and it was blissful. The air was kind, blowing through the fir trees, coming cool off of Rosario Strait. I could see the ferry boats going and coming to the San Juan Islands. I took walks and made quick dips in the frigid salt water. I cooked supper and made a fire in the evening – enjoyed a glass or two of wine.

I could hear the fog horn in the distance. I guess I stayed there a couple of weeks.

I really felt all right – sleeping on the ground again. I was planning another trip, but it doesn’t matter where. This memoir ends with me in the campground.
Posted by Fred Owens at 4:56 PM