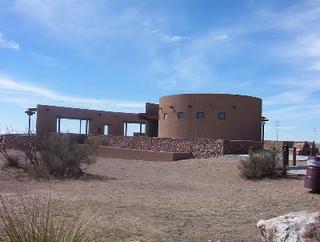 They have a good coffee shop and bookstore in Marfa, plus a wireless connection for my laptop. For a real bonus they have picture glass windows at this coffee shop, and I can see the Union Pacific freight trains roll by from where I sit typing this report. One train just rolled by, going west, five engines pulling, with double-stacked containers, probably all empty, coming back from the Wal-Mart warehouse and going back to Los Angeles, and then on to a boat, to get filled back up again in China.

I have a question: How come our gov’t. forbids trade and travel to Cuba, but somehow we can’t live without China and their trade goods? A Chinese citizen needs an exit visa to leave the country – that is the signature of a communist government, that you need permission to leave your own county. That, and a host of other freedoms, which we enjoy, but the Chinese citizen is refused, such as the freedom to criticize the gov’t.

But I digress. The sky is clear beautiful and fine here in Marfa. It is good to be back in Texas. I drove straight through from Los Angeles, with just a couple of roadside naps, so I will just sit and rest here today. I have already met several people in just a few hours.

CJ runs the coffee shop. He used to live in Manhattan, “But I’m a Marfan now,” he adds quickly.

I walked two blocks to the thrift story and bought a red XL t-shirt for $1.50 – a good deal. I asked the clerk – her name is Kitty – about why the newspaper office was closed and she said, “They don’t come to the office on Wednesday.” That means I will visit the Editor, a man named Halpern, on Thursday.

However I did read last week’s issue of his paper, the Big Bend Sentinel. It looks like a good paper, but it had what seemed to me like an over-blown crime story on the front page.

A Marfa man named Upshaw may or may not have wiretapped the telephone of his ex-wife and several other people. That was 3.5 years ago. Upshaw was indicted on that charge. This is only from what the paper says. This is the third time Upshaw has been indicted by the DA Frank Brown. What that says to me is that either Upshaw is up to no good and hasn’t got caught yet, OR Frank Brown has it in for Upshaw.

Now, it just so happened, that Upshaw’s defense attorney is none other than Dick DeGuerin, who is also defending a certain T. DeLay of Sugarland in an unrelated matter. Small World.

But the editor managed to insert himself in the story by being on the receiving end of some documents from the courthouse that cast the DA in an unfavorable light. The publication of those papers caused the DA to subpoena the newspaper editor to find out who passed on these papers from the courthouse. This gave Editor Halpern a golden opportunity to be a hero and refuse to name his source, all detailed, of course, by Halpern himself on the front page of his paper.

As I said, it seems overblown to me. The underlying offense is unusual, wiretapping by a private citizen against another private citizen. That seems to barely qualify as a felony.

However, I’m sure that DeGuerin is not a low-profile defense attorney either. I don’t know what he has to gain in this neck of the woods – maybe he owns some ranch property around here. The Marfa area has seen a heavy inflow of outside investors and is now quite a center for art and theater.

It is a regular left-ling liberal Hollywood town in fact, and somewhat surprising to find this in the middle of West Texas. But I saw ladies in leotards on their way to yoga class, and across the street it says Wine Bar. I saw several galleries and artist studios and I would say that the art work here is very good, and there is a distinct feel to it. It’s the air and the light – artists will always tell you that. The air is especially clear, and a little bit different in quality that what you see in New Mexico or Arizona – that certain quality of the light. Marfa, as a small town with an artist’s renaissance, has done a pretty good job over all.

This evening they are having a vigil for the 2,000 American soldiers now dead in Iraq. I am going. Whether as an observer or participant matters little to me. And whether it’s for the war or against matters little either. I can bow my head and say a small prayer. As far as the direction and purpose of the war – I’ll say what I’ve said before. I’m stumped. I’m not Cindy Sheehan, and I’m not Donald Rumsfeld. I AM one of the rest of us, and so I will be there on the Presidio Courthouse (built in 1886) lawn at 6:30 p.m.

AND, while being respectful, I will have my portable transistor radio tuned in at low volume to the Fourth Game of the World Series. This is America. I’m not sure about the war, but I AM sure about baseball.
Posted by Fred Owens at 2:58 PM

Awesome blog. I'm loving the site and I have to
return there soon! Going online, when I have the time,
I look for blogs close to your work!
Go and find my blog.