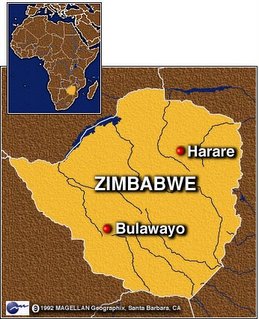 I can't find my grandfather's photo. But yesterday, if you scroll down, you will see his house in Bulawayo. And today you see the map where Bulawayo is located. Mataka, my grandfather was always smiling, but he is an old-fashioned man, so if you take his picture, he will stand erect and have a dignified, serious expression on his face. You will not get a photo of him laughing, but he is a very kind man. Many grandchildren lived in his house, more than ten. I slept on the kitchen floor with my sisters. My brothers slept in the living room. It's what you call cousins, but we call brother and sister -- we all lived together.

Then if grandfather was mad at us he would start to chase us, but we could climb up into a tree or on to the roof of the house, and then he would shout at us, but after a while he would just smile and walk away. He was never mean.

Then he would sit in the front of the house, under the guava tree, and tell us stories about his village in Malawi, way up in the mountains, where he grew up. He said the missionaries found him one day and because he was a clever boy, they sent him to school in Dedza town. After he finished school he came all the way to Zimbabwe to work, and since then Zimbabwe is his home, but also, like most people in Africa, he has more than one home, because he goes back to Malawi to see his family. And me, I was not born in Malawi, but it is my home too.
Posted by Fred Owens at 1:44 PM

Liberal Blogger Posts Picture Of Steele In Minstrel Makeup
Republicans and Democrats are decrying a smear of Republican Lt. Gov. Michael Steele that was posted on the Web by a left-wing blogger.
Find out how to buy and sell anything, like things related to company construction mn road on interest free credit and pay back whenever you want! Exchange FREE ads on any topic, like company construction mn road!

I peep the web for blogs just like this one.
Airtight blog. Your site was off the chain and I will
return!
I can't explain, but you need to check my ar arkansas house cleaning blog!

You have a very interesting blog!

Could you tell me how to say "giraffe" in the Ndebele language?

Please reply to cyganq "at" yahoo "dot com" Thanks!