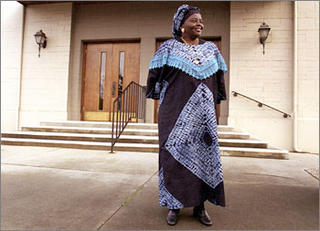 My name is Zodwa. It means "too many girls" in the Ndebele language. It's what my grandfather, Mr. Mataka, named me. He had ten children, The first-born was Lovemore Peter. And I was the first-born child of Lovemore Peter. But "too many girls" can mean both things in Africa -- for Mr. Mataka it means he wanted a boy instead, but it also means he is happy that I was born because I am his favorite grandchild.

He raised me. Often we are raised by our grandfather and grandmother in Africa. All my brothers and sisters we lived at Mataka's house in Luveve.

Luveve means butterfly in our language. So you think our town was named after a butterfly, but it was not. It was named after a white man who came to administer our area. The white man would sometimes get up and leave quickly, so we called him Butterfly -- see, we always give somebody a name. Butterfly was our white chief long back, so we named our town after him -- Luveve

My grandmother's name was Grace, She was a Kalanga woman from Plumtree. I loved her very much but she died. When she died her relatives came from Plumtree and had the burial in her home village. That was because Mataka, her husband, had never finished paying his "Lobola" after all those years. You have to pay for your wife in our culture, with so many cows or so many dollars. It gets very complicated. Mataka didn't pay all the lobola to Grace's family, so when she died, they came and took her body back to Plumtree.
Posted by Fred Owens at 11:15 PM

Fascinating blog. I loved the site you did a good
job on it, I will be back! I surf the net for blog
like this one.
Where you been? You have got to look at my ks kansas house cleaning blog!