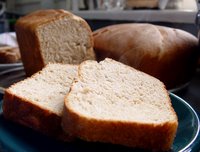 I baked bread tonight -- four loaves. Rosemary bread, I picked the rosemary on Thanksgiving day and kept the small snips in a glass of water on the counter. I bought a small sack of flour that was half whole wheat and half unbleached white flour -- which is the right balance, I think. I bought three packets of yeast for 99 cents. Yeast is a very special thing, but I still don't like it that it costs so much.

I used three small aluminum loaf pans. I smeared them with olive oil, so they wouldn't stick. I mixed, and then I kneaded and let it rise twice. It was like the old recipe I used to use.

The first time in a new oven -- you know that might be a surprise, but it came in like a hummingbird. I'm just waiting for it to cool so I can have a taste
Posted by Fred Owens at 7:14 PM

Sensational blog. I took pleasure in the site and I
will go back! Surfing online for blogs like this one
is worth my time.
Sweetie, go and search my pr puerto rico house cleaning blog for what you need.