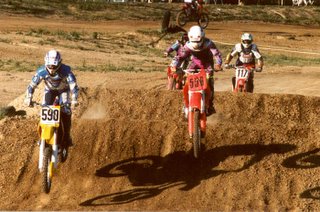 The paper sent me out to the motocross event. I drove two miles down a dirt road to the dirt track.I parked my car and began to walk around. My first reaction was revulsion -- I had landed in redneck heaven. As much as I like Texas, there is a limit. What really bothered me was the dirt itself -- images of my years working in the mud in farm fields and landscape gardens, coming home caked with dirt and soggy jeans. This dirt which I had resolutely left behind in pursuit of my journalistic dreams. I enjoy so very much being clean now, and being clean at work -- and there I was back in the dirt again.

I got over this. I began to speak with people -- all very friendly, of course. There were 4,500 people in attendance, according to the manager -- people from all over the country -- Colorado, Oregon, California. It turns out that little old Floresville is world class in motocross circles for being a good track. And people came from Europe -- I saw a gaggle of Italians wearing funny clothes and heard German accents, and then I fell in with the contingent from New Zealand, lead by Joesphine and her "Mum," as she called her, and her boyfriend, Kevin. Josephine is a flight attendant for Air New Zealand, and loves her bike. She had been to Los Angeles many times in the course of her work, but this was her first trip to Texas. She seemed to like it here quite a bit, except she asked a number of questions about snakes. There are no poisonous snakes in New Zealand -- I could tell that she was fearful. I admitted as such that we have rattlesnake here and they can bite, but fatalities are quite rare, etc. I doubt that this re-assured her. But she was a pretty athelete and I enjoyed talking with her -- certainly fearless on her bike.

She asked me if I had ever ridden a bike. I said no. I didn't want to tell her that my oldest sister died in a motorcycle accident in 1974.
Posted by Fred Owens at 4:22 PM

Fine blog. I found your site suitable for another
visit! And when I'm able to surf the web, I look for
blogs as great as your work.
Look into my ia iowa house cleaning blog.