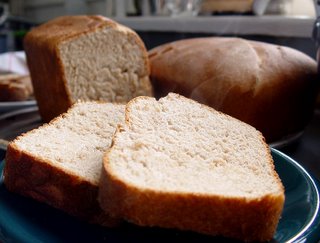 I keep looking at the oven, in this apartment where I live now.

When I lived in Boston in the early 1990s I was on a major cooking and baking binge. I wrote a cookbook and printed about 30 copies. It was called a "love story with recipes." Being a story without a plot about a man who did a lot of cooking to get over his broken heart (me).

I baked so much bread that my friends and neighbors tired of the gifts of loaves. I threw parties with lots of good food and people liked that. I had a very good bread recipe, half whole wheat and half white flour, modified from the Tassajara bread book and the NY Times organic cook book. I mixed it in a very big heavy ceramic baking dish, which I also used to make casseroles.

It was always basic cooking. I was landscaping for a living and ate huge calorie filled meals.

I was a single father to two teenagers at the time, and cooking was a way to make a home, because I sure wasn't going to make curtains.

That all went away. Years passed. The kids grew up. I married a second time and divorced. I bought a house and lived in it, and then I sold it and moved on. Now I am in this apartment looking at the oven.
Posted by Fred Owens at 5:46 AM

Fine blog. I found your site suitable for another
visit! And when I'm able to surf the web, I look for
blogs as great as your work.
Hey why don't you peep my id idaho house cleaning blog site.