At the Café Alemana

Madrid. I had a nice talk with the waiters at the Cafe Alemana in the Plaza Santa Ana. It was a reunion of sorts, because it was in this same cafe that I spent five miserable days in November, 1969. I was running out of money, and the weather was bad. I had a girl friend back in California and I was wondering what the hell I was doing in Spain. I just sat there day after day, passing the time, nursing a café con leche. 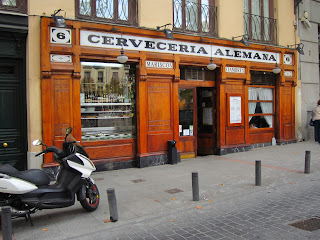 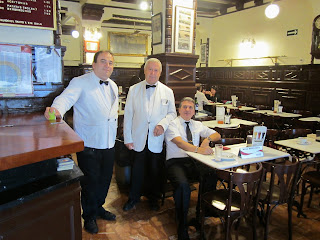 And then 45 years later, I came back -- I stumbled upon it. I wandered into the Plaza Santa Ana -- and I said yes, that was the place. So I went inside and it was just the same, the same white marble tables -- even the same waiters in white jackets.

I talked with the waiters. I told them the story. I was young then, and broke. And now I am not broke, but I am not young either. Salud!

The Cafe Alemana opened in 1904. In the 1930s it was frequented by Fascists because of the German name. With time it has managed to shake off that reputation, except for some older people who do not forget. Whatever -- in the 1960s it was a hangout for poor travelers like me.

I found the Cafe Alemana on Sunday, October 12, while I was on a walking tour with a group, but we only passed it by. I returned to the cafe on Monday, October 13, for a glass of wine and a visit with the staff. I came again on Tuesday, but it was closed -- the cafe closes on Tuesday, according to the sign posted in front.

That was just as well – finding the café closed. I had no need to go back there a second time. I had closed a chapter on my youth. I was done. So, to look for what comes next, I walked across the Plaza Santa Ana, to another café. In Madrid there is always another café. This one was the Café Cinco Jotas. The Café of the Five Js. There is a story behind the name, but I had little curiosity about that. Why did you name your horse Jack? Why did you name your first child Sebastian – who cares? It’s only a name.

A name is everything and nothing. On Tuesday, for me, the name was nothing. I sat for a long time before the waiter came out. It was early, I ordered coffee. He was a young man, not wearing a white coat, not of the tribe of the waiters at the Café Alemana who serve with distinction for centuries. This young man might be gone tomorrow. I would be gone tomorrow. Tuesday, October 14, 2014, was my last day in Madrid.

I looked at the trees in the plaza. It was sprinkling rain. There were few people walking. I was glad to be there. The buildings on the square were clean and white. The air was fresh from the rain. I was on my way to the Thyssen Museum – after I finished my café con leche.

I like to think about things and imagine things, because I am reflective and philosophical, but I must be watching for a trap, for obsessions, for blind alleys of thought that lead nowhere, but only cause pain. You need to keep moving, so it was good that the Café Alemana was closed , because that part of my life is finished. I was young then and broke, limpio y soplado, as they say in Spanish, “clean and blown.” Now I am not broke, and I am not young either.

The language of Spain is rational, intelligent and given to philosophy. One can make statements that are at one time easy to say and also profound to a great depth.

Que es más importante, la verdad o la cortesía? This is a question of philosophy. “What is more important, the truth or courtesy,” it asks. A simple sentence, but it sounds better in Spanish, less brutal, and more conducive to intelligent discussion.


In Spanish, we say personas mayores to mean senior citizens. I quickly learned this because it would get me a half-price ticket at the museum. But I played with it. Soy anciano, I would say, I am ancient. And the cashier would reply, su documento? your document?

I would remove my cap and say, mi pelo blanco, my white hair. A silly joke, but you need to play with a language in order to learn it. You must not be afraid to be a little silly or you will never learn it.

The Situation at Frog Hospital

Frog Hospital, this email newsletter, has been published for 15 years. Subscription income peaked in 2004, at $2,000. Revenue has been going down every year since then, to pretty much zero now....... There's too much stuff you can get for free, I figure. Another explanation is that I have lost my snap.....

Either way, the question is, What Do I Do Now? To write on Facebook or social media, to write for free, makes me a fool and a crank. Writing for free is suitable for amateurs and those who serve a cause. I serve no cause and I require an income.

I am not making an appeal for subscription income at this time. I am stating this situation, as it exists on October 25, 2014.

President Obama might say, “We are exploring all the options,” meaning that he doesn’t know what he’s going to do. I will say the same thing – I am exploring various options. I do not know how to monetize social media. People say look to the cloud for funding. So I look to the sky and there are no clouds. I see nothing but blue sky.

Thank you for your kind attention,

My gardening blog is Fred Owens

My writing blog is Frog Hospital