I was fortunate to get a plane ticket to Madrid for ten days, in the company of my daughter who works for Boeing.


My daughter left from Seattle and I left from Los Angeles. We arranged to meet in Madrid at the B & B at 5 Calle Los Estudios, only a few blocks from the La Latina subway station.


I took the subway from the airport, rather than a cab. A cab would have been 25 to 30 Euros. The subway was only 5 Euros.


I navigated successfully, making two changes, finally getting on the Green Line to La Latina, which is a sort of Left Bank neighborhood, site of the famed La Rastra flea market.


I greeted my daughter, entered the B & B, cleaned up from the journey, and then we headed to the street for a coffee, café con leche.


I enjoyed being in Spain. I spoke Spanish to everyone. They were glad to hear me say it. I was very glad to understand them. There is something about the Castilian dialect that is music to my ears.


La Latina is a densely crowded district. There was a constant stream of local people walking in every direction past the café. Walking and talking.


I observed the man sitting in the lottery booth, hardly bigger than an old phone booth. It is the world’s dullest job, I thought.


I introduced myself by name to waiter, which is not the custom, but it is my custom, and we struck up a conversation. He was a handsome young man and muy agradable.


He welcomed us to Madrid and we felt relaxed and grateful to be there.


I have so much more to say about my journey, but pressing financial obligations require my presence at work this week, so I will have to postpone this composition.

I can add this small piece about the Iberian people -----

A bit of history. It was the Phoenicians and ancient Greeks who discovered and settled Iberia many centuries before the time of Christ. Ready to greet these visitors when they came ashore were the Neolithic Iberian tribes with their druids and masks.


Later the Romans came to conquer, to build roads and viaducts and cities, to unify this vast province, and to impose the Latin language on the local people.


Over time the Iberians became assimilated to Roman culture, and the Latin language developed a local dialect which became the precursor to Spanish.


The Roman Empire crumbled and the Visigoths invaded and took over and founded a Christian kingdom which ruled Iberia for some centuries.


In the 700s, the Arab/Moslems crossed over from Africa and swept the Visigothic rulers aside, ruling Iberia, or parts of it, for 700 years. They did not enforce a conversion to Islam, but it helped you get ahead in the world, if you crossed over from being Christian.


Then Isabella and Ferdinand drove the Moslems out of Spain and back to Africa. Many people found it convenient to convert back to Jesus -- "convenient" in quotes.


Then these monarchs, our beloved Isabella and Ferdinand, funded the expeditions of Christopher Columbus to the New World.


No matter what you think of the Admiral and his voyages, it is good to place him in a historical context. It is good to remember that the Iberian people have always lived in Spain, having been invaded and conquered more than once.


But this old fool still dances in the Plaza. 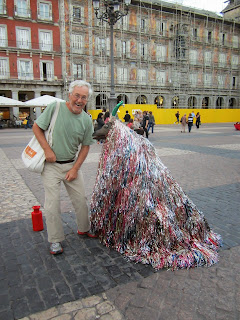 
I am back in Santa Barbara. The punishing drought continues and the garden is suffering. We pray and hope for rain.


I am reading Bleak House. I am halfway through this masterpiece, but the plot is eluding my understanding. I must stop the reading and consult an Internet source, some sort of Wikipedia cheat sheet on the story. Normally I let Dickens write as he pleases, but this time I need a crutch.