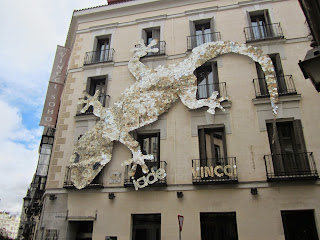 I walked by this hotel dragon in Madrid. I was on my way to the Prado. It was Monday, October 13, 2014. The dragon was looming over the ancient narrow street, but it is not a real dragon. It is made up of CDs and DVDs, all blank and silvery and kind of cute.

The hotel lobby looked very expensive. I did not enter. I kept going to the Prado. When I arrived at the wide avenue in front of the museum, I watched the crew dismantling the bleachers -- bleachers erected for the big parade the day before -- Columbus Day, celebrating his discovery of America on October 12, 1492. It's a holiday in Spain. You can blame them -- they would be glad to take credit.

I watched the baseball game last night, game five of the World Series. Bum Garner pitched a shutout and worked all nine innings. I do not favor the Giants, but I had to admit that Bum Garner was the master of all baseball on that night.

Today, as on most Mondays, I worked for Oscar at his greenhouse in Goleta.I worked, as always, the four hours from 8 a.m. until noon. I spent the first two hours sifting soil, running it through a grater to remove rocks and roots, making it finer and softer. Then I mixed that with compost, also sifted, plus perlite and peat moss -- using Oscar's secret recipe -- plus a few organic compounds in 50-pound bags from Island Feed & Seed.

That's the job -- the first half... The next two hours I used the soil to re-plant vegetable seedlings into larger pots. Taking sage and tomato plants in one-gallon pots, and re-potting them into 2-gallon pots.

That's the job> There is much more to tell, so stick around.--
Posted by Fred Owens at 3:25 PM