Cardinal Blowing in the Wind 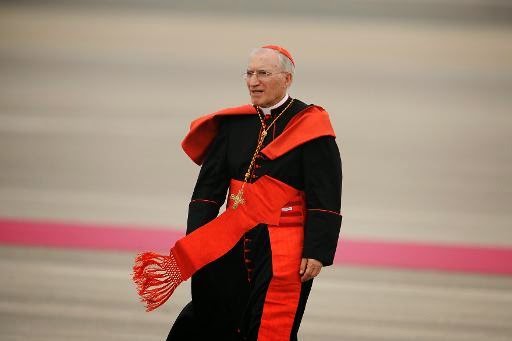 A cardinal blowing in the wind, not the bird, the prelate, a prince of the church, in a pretty classy outfit, especially the red hat.

I met this man in Madrid at the Basilica, that being the Number One church in the entire country of Spain, and this cardinal being the man in charge.

The meeting was by chance. Eva and were on a walking tour which finished in front of the royal palace. The king and queen were out for lunch, so we didn't go to the palace, but right next to the palace is this enormous, huge church -- the basilica.

Let's take a look, we decided. And inside, at the back of the all the pews, was the cardinal himself and a small crowd of nuns and other well-wishers, eager to shake his hand and kiss his ring -- that is the custom -- to kiss the ring on his hand, or merely to shake his hand.

I opted for the handshake, not being accustomed to the bending from the waist, which is required for the kissing of the ring, not being in the best of condition, vis-a-vis the church, not being in good standing, so choosing the lesser embrace.

But still it seemed like a kind of blessing, to be there with this man, who was a prince of holiness....... "Cardinal Rouco Varela was appointed by Pope John Paul II as Archbishop of Madrid in 1994."
.
.
.
Posted by Fred Owens at 3:46 PM