The Best and the Brightest 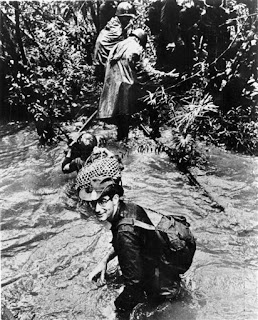 "The Best and the Brightest" is David Halberstram's very best book, about the men who starred in the Kennedy and Johnson administrations and led us into the debacle of Viet Nam.

The title is not ironic. Robert McNamara, Dean Rusk, McGeorge Bundy and others really were our best and brightest. The story is fascinating. I am re-reading it, probably twenty years after I read it the first time.

I avoid thinking about my own past for the most part, because I find nostalgia to be a sickly feeling -- but when there is a purpose, I will do it.

This war in Iraq is not my war. My war was Viet Nam and I served in the regiment of Hell No, We Won't Go.

It was awful. I don't know a single American man my age who views that war and that period without ambivalence.
Posted by Fred Owens at 12:02 PM