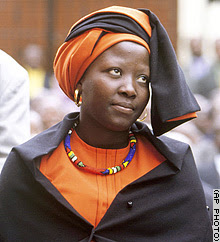 The Rain Queen Makobo Constance Modjadji VI, 1978-2005, was the 6th in a line of the Balobedu tribe's rain queens. Makobo was crowned on 16 April 2003 at the age of 25 after the death of her predecessor and grandmother, Queen Mokope Modjadji. This made her the youngest queen in the history of the Balobedu tribe.

But she died unexpectedly two years later and a successor has not been named. There is no Rain Queen now. This is a matter of great concern.

The Rain Queen reigns in the northern provinces of South Africa. Her guidance is widely respected throughout the region, in Zimbabwe, Mozambique, Botswana, and Zambia

She can make it rain, or the rain comes through her, however it is put. She is assurance against drought, which is the greatest threat to the livelihood of the people in that area.

The unit of currency of Botswana, a mostly desert country, is called the "pula" which is the Tswana word for rain. Rain makes the corn grow. Corn is food, corn is made into corn-beer. But no rain, no food, no beer, and pretty soon no people.

This is a crisis.

People like me know nothing about Africa. Everybody is going there now -- Bono, Bill Gates, Madonna, Angelina Jolie -- buy a plane ticket, get on a plane, take the tour, make a press conference -- they know nothing. I know nothing.

Except for Princess Diana, she is revered throughout Africa -- she was the one who understood what was going on. Now departed from this earth ten years.

No Rain Queen now, no Princess Diana. The situation is very bad.

Nelson Mandela will not live forever. When he goes, it will get worse.
Posted by Fred Owens at 11:23 AM