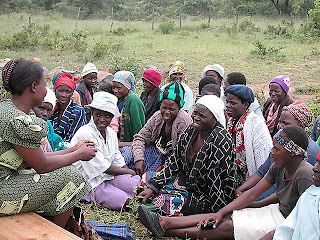 Many of the people I knew are dead now. Even last week I got an email from Mpofu that his sister died -- that would be Patricia, but it could have been another sister that I did not meet.

Many times when we were in Bulawayo we went to visit Patricia at her pleasant house in a neighborhood called Luveve. She had a tiny house, and it was good. Her mother lived there too, Mpofu's mother. The mother died too, but she was old and this was expected.

Patricia and many other have died from the troubles. I learned never to ask what people died from, because I would not get an answer to that question, except, "Otherwise, she died."

I might have pressed for an answer, but that never works in Africa -- if you do that, they will just tell you anything you want to hear.

For news about the crisis in Zimbabwe, go to Zimbabwe Situation. This site is a daily compilation of news stories.

For a more personal account of the madness and suffering, read the letters of Eddie Cross

He is a merchant living in Bulawayo. His business is hanging on by a thread, but he is determined to stick it out, and even raises small hopes for a future when President Robert Mugabe dies or leaves office.
Posted by Fred Owens at 4:09 PM