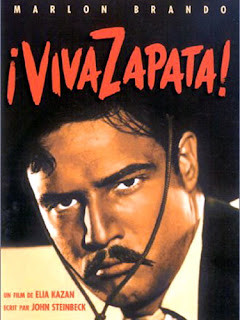 I have this on the authority of Colonel Jesse Perez, U.S. Army - retired, that Marlin Brando played a credible role as Emiliano Zapata, the Mexican civil war leader. Colonel Perez and I had many interesting conversations at his office, both of us sitting in comfortable leather chairs, and we often disagreed, quite amiably. But his endorsement of Brando as Zapata was something I shared enthusiastically.

Colonel Perez was the executive director of the Floresville Economic Development Corporation, during the fifteen months I lived in Floresville, Texas, when I worked there as a reporter for the Wilson County News.

Floresville is is a half-hour's drive to the Southeast of San Antonio, set in very Texas-looking country, lots of mesquite and prickly pears and cattle.

Colonel Perez descends from the Hispanic community of Floresville, which has lived side-by-side with the Anglo community for almost 200 years -- but we got here first, he would say, in so many words.

"We merely co-exist," Perez stated, when I asked him about Anglo-Hispanic relations. On this I disagreed, I knew there were issues and conflict and hostility between the two groups, but I also knew of love, friendship, and beneficial working relationships -- far more then mere co-existence.

Still, Perez, after his illustrious Army career, returned to Floresville and became the leader of the Hispanic community, and his stance was quite militant. On this we also disagreed, because I felt that in his determined opposition to most arrangements with his white neighbors, he was passing up some good opportunities for the progress of his own people.

I also disagreed on this, they were not merely "his own people," as if he had them in his pocket, and others could not know them without his permission. And so, some of his white opponents called him a racist. I never called him that, to his face, or to other people, but only because I liked him very much.

He was dignified, educated, intelligent, and amusing -- a good friend. His office was a refuge for me. I toiled over at the newspaper in the company of 17 women and one other man, and the ladies could drive me up a wall, so then I would walk across the town square, across the courthouse lawn, to Jesse's cool, leather-bound masculine cave, and sit-down in his red-leather chair and lean back, him leaning back with his friendly grin, and we would begin to talk.
Posted by Fred Owens at 3:20 PM