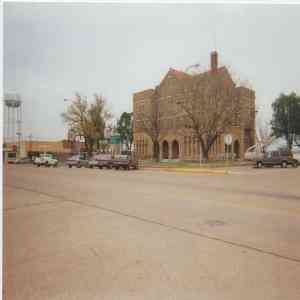 I'm not sure that this is a good photo of Archer City, but it's the best I could find. Pictured is the Archer County Courthouse, looking across the wide main street, which is Texas Highway 79.

Archer City is about 20 miles south of Wichita Falls -- making it nearly 70 miles from Vernon -- talked about in previous posts.

Archer City has less than 2000 inhabitants. It is the home town of Larry McMurtry, the one he dramatized in his first big screenplay -- The Last Picture Show. As McMurtry told his Archer City neighbors again and again -- "The Last Picture show was a MOVIE!" and a work of fiction. Nevertheless the citizens of Archer City were highly incensed at the negative portrayal of their town in McMurtry's work.

Years passed, McMurtry wrote the screenplay for Terms of Endearment and wrote Lonesome Dove. He became wealthy. He moved back to Archer City and by this time, the locals people were glad to have him back.

McMurtry, who had been a book collector and seller before he became a successful author, began to buy a lot of books -- because he could afford to. By a lot, I mean close to 500,000 books which are now housed in four buildings in downtown Archer City. All for sale.

In fact, Archer City, out there in the high lonesome, has one of the biggest bookstores on the planet. [Powell's in Portland, Oregon, is the biggest independent bookstore in the country with 1.5 million volumes.]
Posted by Fred Owens at 4:50 PM

will this be your next home?
I was talking this morning to a friend who doesn't have a home. He travels constantly. "It's good," I said, "to know the postman, and the barrista." Community, is comforting. Welcome.