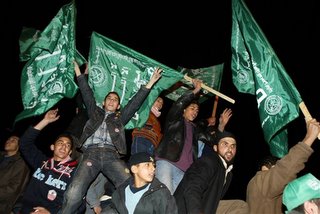 PROBLEMS BETWEEN ISRAEL AND PALESTINE ARE NEVER-ENDING

Hamas won the election in Palestine this week, surprising everybody except the Palestinians. Amid widespread commentary in the media, nobody said that Hamas stole votes and nobody claimed any election fraud. It was a clear-cut, straight-up win for this militant faction, which is formally pledged to the destruction of Israel.

Aside from the danger of this pledge, consider its lunacy: Israel actually does exist, and yet Hamas says it does not. The Jews have lived in the Middle East since the beginning of history and long before the time of Mohamed. It must be their current independence that is so galling to the Arabs, and the Jews haven't been nice about it either, like they were in the past when they said "Excuse me for living," and their Arab masters sometimes found them to be useful, as long as they paid heavy taxes.

Now Israel exists independently – as plainly as Ariel Sharon's boots on the ground in the Negev Desert. Consider Sharon himself -- he lied to many people, but he never to lied to himself. He played the game of illusion throughout his political career, but he never believed those illusions. Sharon knew who he was, and he knew that his own life was no illusion. His was a life of sheer, exuberant, determined existence. Sharon’s life was quintessentially a fact – not a dream, or theory, or fantasy.

And then comes Hamas, spawning suicide bombers, those evil viruses walking into restaurants and bus stations, those poor fools who were willing to deny their own existence in order to deny the existence of other people.

But the Hamas strategy of suicide bombing did not succeed. In response to it, Sharon did not put up a smoke screen or a mirror, or call for a conference in order to discuss the issue. “What issue? What is there to debate?” Sharon might have exclaimed. He was not a religious man, but he surely knew the verse in the 43rd chapter of Genesis, when Jacob said to his sons that it is better “to live and not die.” Not to live well, or to live righteously, or to live in freedom, but first of all to live. Thus Sharon in no way improved the culture of Israel, but instead insured its continued existence.

In order to do that, he erected a concrete wall between Israel and Palestine. You can call this concrete wall a symbol, yes, but a symbol of what? Of the division between two peoples? Perhaps, but I would say this concrete wall is not a symbol at all. It was not erected to be a symbol or to send a message, but only to keep suicide bombers out of Israel, and it worked.

So Hamas redirected itself and won the election in Palestine. This was a significant step closer to reality for Hamas, to go from suicide bombing to winning votes. Palestine cannot be different than America in this respect -- that all politics are local. Hamas cannot have won the vote based on their insane platform; they won because Palestinian voters could -- I hope this so much -- be making a pragmatic choice. I am hopeful -- this is subjective, I admit -- but I actually think that Hamas might actually choose to govern, that is, to mend sewers, build schools, and do those other mundane chores. Lord knows, Yassir Arafat never governed. Palestine. He never had time for it, he spent his life chasing twisted rainbows, and sold those dreams to his own people. Arafat built illusions, but he did not build a nation.

Hamas might be different. Is Hamas beginning to realize that denying the existence of other people is not a recipe for nation building? If Hamas chooses to govern rather than to pursue disastrous fantasies, then someday Palestine will exist as an independent state. Palestine will come down from its lunatic state and begin to take out the garbage and wash the windows and complain and suffer like the rest of it.
And the Palestinians will still be mad at the Jews who, after all, can be quite difficult to live with. Yet Israel exists.

Ariel Sharon lies on his death bed. He said, of the Palestinians, that he never trusted them. He said, of peace, that he had no hope for it. But he is leaving the possibility of trust and hope and peace for the people who come after him.
Posted by Fred Owens at 3:31 PM

Fascinating blog. I loved the site you did a good
job on it, I will be back! I surf the net for blog
like this one.
Please come by and see my mo missouri house cleaning blog.