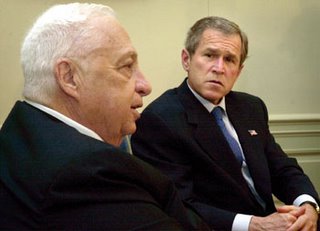 It is not really useful to compare Ariel Sharon and George Bush. First, they are superficially similar -- conservative, tough, inclined to make a military response. But let's look at this picture -- first of all, it's not fair to George Bush, because the camera lies. The camera is a tool wielded by human beings, and human beings tell lies.

In the image presented here, George Bush is puzzled, inquisitive, and respectful. He looks up to Ariel Sharon who is 18 years older.

The image of Ariel Sharon shows him to be calm, strong and substantial.

Sharon evacuated the Israeli settlements in Gaza this year despite a lifelong public commitment to continue their existence among the Palestinian population. Why did he do this? To be loved, to be popular, to be deemed peaceful? No, for none of those reasons. Sharon forced the evacuation of the Gaza settlements because he believed it was to the strategic advantage of Israel, and for no other reason.

Sharon's "change of heart," which was nothing of the kind, is the action of a man who has no attachment to his image, and had no attachment to a position that had become untenable. This is a kind of truth -- that a nation, Israel, exists and serves its own interests.

I would not say this of George Bush. He is not free of his own image, and he cannot take a detached view of his own position. This is not good. I don't know this man -- who he is or who he works for. Bush is far less substantial than Sharon. He looks at Sharon in this photo, but can he learn?
Posted by Fred Owens at 3:01 PM

Hype blog. And I admire your site and plan on
returning to it! When I web surf it always helps me to
find great blogs.
I hope you had a chance to check out my ri rhode island house cleaning blog.