"It's a good day to die," he said, before he was executed at San Quentin prison in California at midnight last night.

This man deserved to die for his crimes. The judgment against him was sound, and we all ought to, quite seriously, judge each other's actions, but I would not execute this man, or any other. I am opposed to the death penalty, now legal in 38 states, including Texas, where I live.

Clarence Ray Allen is dead now. We will kill many more Americans today simply from carelessness, from a failure to pay attention, from meanness, from simple mistakes, or even from the best of intentions. Many more Americans will die today for God's own reason, and we will have no idea why they were taken unexpectedly. Others will die, after a long and good life, and that will make sense.

It is possible to have a good and just society without the death penalty, and so I oppose it. 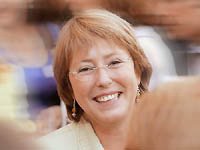 "The Chilean President-elect, Michelle Bachelet, has pledged to name a cabinet with an equal number of men and women." [BBC web page]

She will make a good president despite this faulty logic. An equal number of men and women in the cabinet? That is the right way to conduct a square dance, with four women and four men, but not a government.

I like her because she's pretty and has very good skin and a very cheerful smile. So, you say, I ought not to judge her by her looks, but by her character and the substance of her actions. Yes, this is right. But it is Ms. Bachelet who is conducting government like a square dance, so naturally I will choose the prettiest partner.
Posted by Fred Owens at 5:40 AM

Your thoughts about life and death make so much sense.

Fascinating blog. I loved the site you did a good
job on it, I will be back! I surf the net for blog
like this one.
Go and find my de delaware house cleaning blog.