From Walden Pond, back to Chicago

Our home back in Chicago 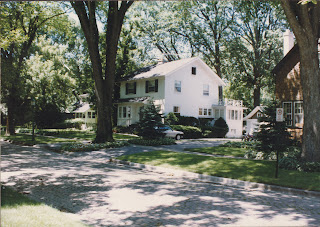 That summer in Concord in 1996 my daughter threw me a surprise 50th birthday party. I was very happy that such nice people came to wish me well....But otherwise I was living on fumes. After Neil gave up his landscape design business and failed to hire me again for the season, I had to scramble to make contacts with my old customers and get some income -- My heart just wasn't in it anymore .................. Beside, I wanted to be a writer. I WAS a writer, but not published anywhere -- manuscripts were piling up unread, but it was always more important than my "day job." ........................What I learned from Neil, who was truly a master gardener, was that I could never be that. Neil was successful in his work because he gave it his fullest attention. He lived and breathed azaleas and rhodies and maple trees, soil types, rainfall, and especially stone......................... Neil was a stone genius -- he would place them in the garden just so, and we had the most artful discussions about this -- talking about stone as we sweated and wrestled with a granite boulder .... but it was over -- no Neil, no easy wages and good lunches, no joking our way through the day. I couldn't handle another defeat.
My mother was dying. She had scarcely been sick a day in her life, but she had major surgery that summer and she had only a small chance of survival..... My daughter was going to college in the fall and my son was already out of the house, so it was time to break camp. I had a garage sale, because I had actually accumulated possessions in the six years and three apartments of my new England sojourn. What did not sell I marked "free" -- it was all gone within hours .... Just one pickup load to take with back to Chicago ....................................... That was our home in the photo, 1612 Forest Avenue, Wilmette, Illinois. A white stucco house where my mother had lived since 1946 -- 50 years in that house, the only home I've really had, and it's the trees more than anything else -- the most wonderful elegant elm trees towering --- see the dappled shade on the brick street. In the backyard -- large oaks -- such wonderful trees. That's where I grew up, and this was my last summer, home after many years gone on continental wanderings.
Posted by Fred Owens at 7:14 PM