What about the Bush? 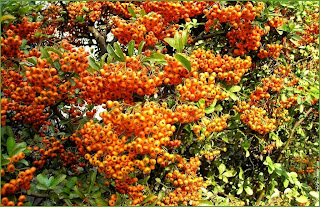 What about the Bush? So, I could drive up to Newton to see Helen and play the Steinway piano in her living room -- it was such a vivid contrast to farm work and crude dinners back in the Skagit Valley. But first, I must talk about the Pyrocanthus.

I rented the apartment at 42 Blakeslee Street -- three bedrooms furnished, in the best part of Cambridge. I even had off-street parking for me car. Except I had to duck around the fiery prycanthus every time I got out of my car. It was big and beautiful, but it was thorny and it was in my way. So I cut it down ........... Down to the ground ... You know, it wasn't my bush..... Mr. Magestrelli was my landlord -- a perfectly nice man. When he came by a few weeks later and saw that the pyrocanthus was gone, he was very upset ..... And me, a supposedly mature man of 44 years, took a smart aleck attitude toward this kind senior citizen, like I had done him a favor by cutting down the bush ..... "And it will grow back again," I said, as a feeble defense ...... I was not a good tenant. I was careless with his property. I abused the furniture and the curtains .... Well, for an excuse, I had been living too rough.

Living too rough, so I sought refinement and took a course in good manners. To wit, I read four of Jane Austen's novels -- that was my first winter in Cambridge. I think it was "Emma" that was the first one I read ..... Somehow, I recalled my mother's urgings at the dinner table -- to sit straight and take small bites and ask to be excused ..... I wasn't raised to be a farm hand --- but it was like a war inside of me .... because I had rebelled against the sterile suburban lawns of my youth .... I had found the soil as a young man, had slept on the ground and dug gardens and made trails in the woods and the soil was everything.

But that first winter in Cambridge, Helen found two tickets to the Boston Symphony -- orchestra seats, front row and center. We went together and heard Yo-Yo Ma play the Bach Cello Suites. He was magnificent and yet so humble, a great artist. I squirmed in my seat like an unkempt canine, and yet I was so happy and Helen was beaming with pleasure, that she had done this for me ..... I was still lost, but now it didn't feel so bad ....

Lois Wauson
We used to have a pyracantha bush in the 50's at our first home on Trudell Dr. in San Antonio. I loved that bush. I cut branches off with the red berries to make a centerpiece for Christmas every year. I know how your landlord felt. I would have been heartbroken if someone cut it down. And my husband did that many years later up in N. Texas, when he cut down my favorite honeysuckle bushes. saying 'they will grow back'"(they didn't). I was devastated and mad for weeks.
Posted by Fred Owens at 2:26 PM