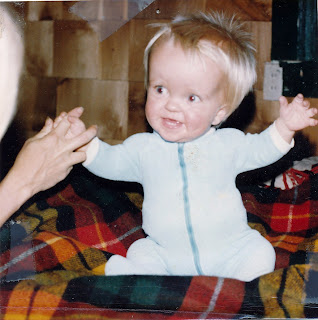 
Smiling babies make everyone happy. Mom dying of cancer back in Chicago is quite a bit different -- but it's not really sad. The sad parts of "Too Many Mornings" are the defeats and failures -- that's where the pain lies -- but Mother leaving us -- that was just awesome.

We all came home that summer, Tom and Carolyn came in from Los Angeles, Katy came in from Denver. We took turns looking after Mom. She bore it well , but she didn't like being sick -- I don't mean that lightly. Mom was a strong-willed woman who never got sick because she did not like being sick and would not waste her time lying in bed...... And she did not like being looked after by her kids or by anyone else. She was not going to become some sweet old lady who needed help to get into the car ...... She was scared of dying, but not that scared -- she just didn't care to linger and draw it out.


Toward the end, she went back to the hospital and she sent me away. She only wanted my sisters with her at that point -- because of her hair. She could not get her hair fixed and combed right in the hospital, and she did not care for her sons to see her disheveled.... That's not silly, that was important to her.

It was a gift. She was our mother and we were everything to her. She died in September after only three months of illness. I remember this awesome feeling. I told myself, "This only happens once in your life, so do it right and give it all your attention." ...... I never felt so special and so blessed. Mom had arranged everything to make it easy for us. Katy and I went to the funeral home to pick out a cheap casket -- what Mom wanted. Instead we spent money on white flowers -- but not lillies...... It was like the whole world stopped for our benefit .... Neighbors brought food over. Relatives sat in the living room..... It was like floating on a cloud.
Frank Munaretto was over at the house and in close contact with my brother Tom. Frank was Mom’s accountant. Mom always said there’s no such thing as security but she sure watched her money carefully.

And dying was a problem for Mom, because, seriously, what was the point of going to heaven if you can’t take it with you?

I know she would have preferred to keep her money herself, but her second choice was to give it to us kids, and Frank was all ready and prepared to divide everything into four equal piles. Kids will fight over $5 and a bread basket, so the amount doesn’t matter, what matters is the process and the passing on of goods -- done rightly, it is a blessing. That was Mom’s gift, she kept us together as a family after she was gone, because that’s what she wanted.
Posted by Fred Owens at 8:13 AM