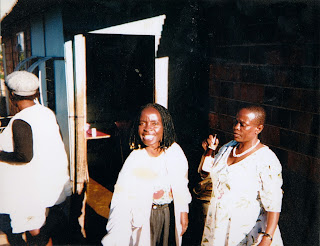 This was our engagement party at Aunt Janet's home in Entumbane, in February of 1997.

You see her intensity and her dazzling smile. She was a small women of great vitality. She was Precious's favorite auntie.

Aunt Janet made many journeys to Malawi, to the city of Blantyre where she owned a store. She was an enterprising woman  -- she had many dealings of small prosperity, carrying shoes from Zimbabwe to Malawi, or coming back with bicycle parts to sell, or dealing cabbages in Francistown in Botswana -- she always had the energy for dealing merchandise.

Six weeks after our party she was dead. What did she die of? What disease? No one said. No one ever said. So many young people died in the Mataka family, 20, 30, 40 years old and dying. but they never said what it was and I accepted that because it gave them dignity.

You may think you know  what killed them, but you don't know, and you have no right to speculate. It was their death and their privilege to explain it or not.

Aunt Janet was waked at Mr. Mataka's house in Luveve. The small coffin fit her small body. She was dressed in white with a pretty lace cap. The coffin was laid on trestles in the living room -- where all the couches and dressers had been removed for the wake. She looked so calm in her pretty lace cap tied under her chin.

The couches were laid out around a fire on the one said of the house where the men gathered and sat the whole night. The women sat on the other side of the house.

In the morning we took her to the Luveve Cemetery and buried her. Some months later I paid for a small cement marker on her grave.

I only met Aunt Janet a few times, but she was my favorite. When I was courting Precious I knew enough to please her aunties. I rented a good car and we drove them around town  to see the fountains. Aunt Janet and Aunt Winnie were riding in the back seat, eating buckets of fried chicken and drinking ice-cold beer. They thought I was just a fine fellow to marry their daughter Precious.

That's Aunt Winnie on the right in this photo. Her head is shaved because she was mourning her departed husband. Aunt Winnie herself died a few years later.
So many people in the Mataka family died, and not reaching old age. Mr. Mataka himself, the grandfather, lived into his eighties, and one day he made the journey back to Chembe village in Malawi and he died there, buried next to his sister, and next to his mother and father.

But the others died young -- Aunt Janet, Aunt Winnie, Aunt Marjie, Uncle Milton, Lawrence, Patrick, Francis, Maphuto, Christopher and several others -- too many. I think African people die too easily, like some kind of spirit sickness, they just lay down and die. It makes me sad.
Posted by Fred Owens at 8:26 AM