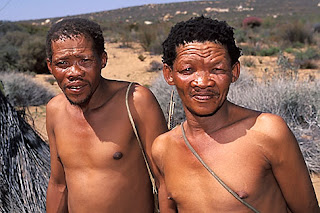 We Were Here First 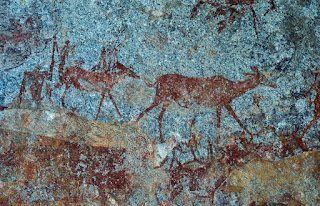 Yah, you were here first and $2 will buy you a cup of coffee.

Bushmen, or San people, drew the cave art resplendent in Matopos Park, as you can see, wonderful drawings in red ochre, drawings made thousands of years ago.

We used to drive out to the park and stand in the cave to look at the drawings. We pretended it was our home. I said to her, "We could live in this cave, fix it up nice, have a fire, stay warm and dry and the leopards could not attack us at night." I said that because it made sense to live in a cave, and to make drawings is a natural urge, common to all men at all times.

I don't think I saw them. But maybe they saw me.

Who was here first? Not me, that's for sure. And how much does that matter? How much respect is due? Maybe a little, in my opinion. It much more matters what you are doing now.

But, maybe 2,000 years ago, at the time of Christ in Palestine, the Bantu peoples made a mass migration. The Bantus  -- all these tribes of Xhosa, Zulu, Ndebele, Shona, Tswana, Tonga, Kalanga and others -- originated in the central highlands of Africa -- in Rwanda and Burundi and the Congo and Cameroon.

They came migrating southwards with their cattle and crops, moving slowly, over generations, but taking over from the Bushmen who were pushed aside and conquered and enslaved.

Now the Bantu live and rule in South Africa, but they adopted the click sounds from the Bushmen in their language, and that's why the Ndebele language has click sounds -- a Bushmen heritage.

So my African wife spoke Ndebele and made click sounds which  I learned to imitation  -- but here family was not Ndebele. Her name, Mataka, was not Ndebele.  Anyone who heard that name would know her people were new comers.

I will tell you where her family came from in another post.
Posted by Fred Owens at 12:49 PM