Eva with a chicken 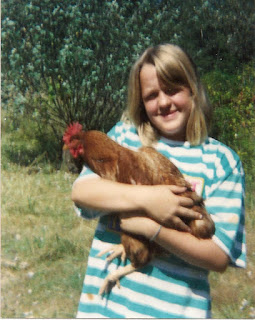 Eugene got the headline last week, "My Son the Librarian."  First born and all that. Eva only got an honorable mention, a tag along kid.

But I used to tell her, "You always be grateful to your older brother. He was the one who took the blows. He ran interference for you."

Mother and father work out their theories of child-rearing on the first child, until they get exhausted and give up. Then the second child comes along and they just do what comes naturally. It gets easier for everybody.

So being first born you get more attention, but how good is that?

Here she is about 11 years old holding a chicken, a Rhode Island Red. We lived on the old farm, 3325 Martin Road, Mount Vernon, 20 acres of overgrown pasture and alder wood. Probably 1990 when this photo was taken. Eva was born not far from this farm, at Skagit Valley Hospital, March 4, 1979. She was a pretty baby and the nurse combed her black hair into a curl.

We took her home from the hospital. She was energetic but not cranky. Didn't need too much sleep, always healthy, liked to play, had a good appetite, grew up strong and true.

I need to dig out a photo of her when she was a teenager and tell about those years. But I will leave you with this image of her embracing her hen friend.

These were magic chickens.  The coyotes were always coming around the house at night, but they never got a chicken. We never penned them either, they spent the night in a tree, I guess.

We had  three goats, but that didn't last long. One day we came home and one of the goats was inside the house, standing on the kitchen table, looking like she owned it. They were too smart for me, so we gave them away to somebody.

We cut all our firewood off the alder wood in back of the house. Lived there almost five years. Until January, 1991, when we got up and moved clear across the country to Cambridge, Massachusetts, to a furnished apartment with off-street parking in the fancy part of town  -- Cambridge is where Eva matriculated as a  teenager, so I will tell that next. 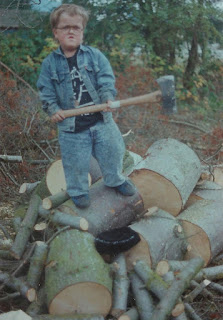 When we lived on the old farm on Martin Rd, Eugene helped with the firewood.

Looking for Work. I finished working at the greenhouse at Healing Grounds Nursery in Goleta and I am looking for another position. It's very discouraging. I have a dismal employment record and few marketable skills. If esteem depends on accomplishment in the world of work, I come up zero.  I did enjoy working at the Wilson County News in South Texas -- the publisher of that newspaper reads Frog Hospital, so i want her to know that -- and I liked working at the Hedlin Produce Stand in LaConner.

That's two bright spots in 50 years of labor, but I'm not done, I will find something. The only thing worse than working is not working.

Important Events in the Lives of Famous People

Frederick Winyard and his wife Nora -- their home is in Anacortes -- traveled to Portland, Oregon for the 50th class reunion of Reed College, class of 1965.

Fred denied rumors that he served as a mechanic on Ken Kesey's Magic Bus back in those days.

Patricia Paul, LaConner attorney and almost famous cook, is re-considering her plans to visit El Salvador -- too much violence.

Alan Archibald, prolific left-wing blogger from North Carolina, is spending five weeks in Portugal, Spain and Morocco. Alan has sent me an email almost every day for the past ten years. I read most of them and often answer back. His blog is Pax on Both Houses.

Harvey Blume of Cambridge, Mass. and Andy Boyer of Columbus, Ohio are hoping the Cleveland Cavaliers can finally bring one home. Me too.

Monica Guzman, cutting edge blogger from Seattle, has been awarded a one-year fellowship at Harvard  -- you know, that school in Cambridge. She posted a link to a story about Digital Journalism -- her field -- that was published in the New York Review of Books.

The story is about news websites such as Buzz Feed and Vox, and how prominent journalists like Nate Silver are breaking away from the mother ship -- in Silver's case, it's the NYTimes -- to found their own news websites.

All this new news stuff goes right past me, but one thing remains the same. The article reports that sites like Buzz Feed are pressured by their advertisers to promote certain stories and kill other stories. Yes, that is the eternal struggle for integrity in journalism, in all formats. Advertisers pay the freight and want to have their say. Some things never change.

The Drought.  In the Goleta Water District north of Santa Barbara, water rates are going up by 50%. It's really quite simple -- when people use less water, the costs to the district do not decline. They still have to maintain 270 miles of pipes and pumps and service 16,000 meters.  Ergo, they need to charge more money for using less water. Makes perfect sense to me. But a lot of rate payers are simply not paying attention and will be rudely shocked come July when their $100 monthly bill comes to $150.

This is called a drought surcharge. My question, before the board at the June 9 meeting, will be, "When the drought is over, will the rate go back down again?"

Other Drought News. A square patch of lawn, 10 feet by 20 feet, in Laurie's back yard, looks brown and dismal. No watering. We can replace the grass with a drought-tolerant ground covering called dymondia, but it makes little sense to do this in June, when the ground is hard. We will wait until November, when we can expect at least some rain. That will soften the ground and make lawn removal much easier. Really, summer is not a good time to dig up grass and re-plant. I'm afraid we will have to kindly gaze on the brown patch and let it stay dormant.

Go to the Frog Hospital blog and hit the PayPal button for $25, or
Send a check for $25 to