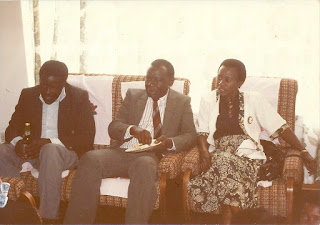 We called him Mr. Tea because he only drank tea and never drank beer.

Lovemore Peter Mataka was his name, the first son born to Mr. Mataka, the first of nine children, and father to Precious. He was a bad man -- pinched, mean, dark and brooding. When he smiled he scared you. He kept two scrawny half-starved dogs in his back yard -- vicious animals. He was a womanizer, his wife served us meekly when we visited. She gave him two sons and sat at his feet in his cramped un-homely cement house.

I would have felt sorry for him if he had not harmed so many people. The Mataka clan might have amounted to something without his damaging leadership. He was dominant and abusive.

Precious spent the better part of her childhood with her grandfather Mr. Mataka and her grandmother Grace. They were loving and kind and welcomed many grandchildren to their home.

Lovemore Peter Mataka worked at a metal fabrication factory, but he got fired for stealing  -- one of his schemes that failed. He always had another scheme, would I loan him money to open a bottle store out by Matopos, would I pay him lobola for marrying his daughter.

He was an intelligent man -- this is what bothered me. He was surely the most intelligent person in the Mataka family -- you could see a fine intellect in his eyes. Yet he was cruel.

Did he hate me? "You came to Africa with a smile, but you will see the terror," he said because he had those kind of eyes, and with his intelligence I know he could see right through me. Like he knew me well and I was going to pay and pay until I had nothing left, and not pay for the benefit of his family because that would have made sense. Never for his own family. Dirt for them. Let them drink their foolish beer and die.

I never saw any good in him. He came to our house on our wedding day, sitting on our good furniture in the living room. Precious's cousin Patricia sits with him in this photo, and an unknown man on the other side. He was there for the reception, not the wedding itself.