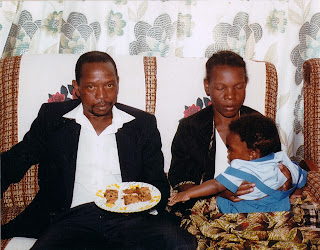 Uncle Smiley was a good man.

Smiley, the younger brother of Mr. Tea, was a householder and working man, a father to his children and a husband to his wife.

We lived near him in a rented house in Southwold, a suburb of spacious homes built for white railroad workers in the days of Rhodesia. These were ranch houses that would not look out of place in the San Fernando Valley.

Southwold, since the end of apartheid in 1980, was no longer exclusively white. In fact, it was almost all-black, but middle class black -- there were people who had swimming pools and garages. And they kept cars in their garages. This alone astonished me -- keeping a car in the garage -- because even middle class residents of Southwold did not accumulate the mounds of stuff found in American garages.

Nkleta Nine and the other townships had been exclusively black under apartheid, and still were all-black to my knowledge, but not by law, only by custom.

The homes were small cement block buildings and quite decent, each with a cold water tap and a working flush toilet. Each with electricity and garbage pickup. There were no hovels or shanties. As I said, it was decent. Mail was delivered every day.

And some few people had telephones. Well, you see, the government owned the phone company and service was spotty. You might wait months for service or you might pay a healthy bribe.

Uncle Smiley did not have a phone nor a car, nor a garage to put the car in. He had five small rooms  -- living room, bathroom, kitchen, and two bedrooms. One bedroom for Smiley and his wife and his daughter Grace, the other bedroom for his younger brother Ronnie, a hapless young man who worked for an Indian family stocking shelves at their grocery store.

The Indians were the merchant class in Zimbabwe, owning many grocery stores and appliance businesses.  They were pretty tough people to work for, mean and stingy with wages. It was considered much better to have white employers. Ronnie complained softly about his Indian employers, but he seemed to lack the fiber to do anything about that.

Ronnie had a girl friend but he could not get married because of his poor wages at the grocery store. How can I pay lobola? he said. Lobola, the bride price,  once paid with cattle, and now paid with cash, is a complex negotiation. If Ronnie had been enterprising, and if people had praised him more, he could have arranged loans from various friends and relatives and made a down payment on the lobola  after conducting equally complex negotiations with his bride's family. Payment would continue in small pieces over many years. It was a contract that bound two families. The modern bride might squawk about being sold, but then she might feel proud of commanding a large price. College girls, with their ability to earn salaries, wanted top dollar, if they could get it, while ritually proclaiming feminist goals against the bride price.

I called Smiley's wife mamazala,  which means mother-in-law. That is not her in the photo. Mamazala was a comely woman, a good housekeeper. She baked scones in her oven to sell to her neighbors. With that small money she paid school fees for her daughter Grace and bought other things.

Smiley rode his bike to work every day, some five miles to a factory that made enameled cooking pots  -- never took the bus, but saved his money, and had a few extra dollars to take to the beer hall on weekends.

Look at the photo. Smiley was kind of an odd name, because Smiley was no happy-go-lucky character, he was a pretty tough little bastard, you wouldn't want to mess with him.


The photo was taken at our house on our wedding day, September 1, 1997. The woman sitting next to Uncle Smiley is unknown.
Posted by Fred Owens at 9:40 AM