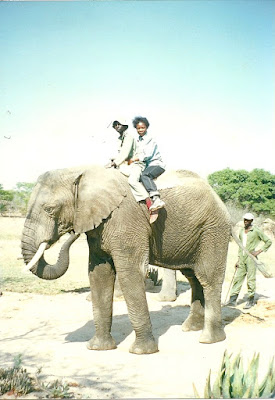 Precious was having a wild hair day so she went for a ride on the elephant.


African elephants are very hard to tame. They are not used as work animals like the elephants of India. I asked the driver on the elephant I was riding. "How do you get them to do what you want?"

"But we seem to be riding safely," I said.

"Until we run out of peanuts," he said.

The elephant would twist his trunk up and back to the driver and be given a peanut.

This was in 1997 in Chihvu, which is on the road between Bulawayo and Harare. The elephants were kept at a game farm called Denise's Kitchen. We stayed there overnight and rode the pachyderms on a whim.

By the time of this outing we had been married for several months. I was getting homesick and missing my kids and the money part was impossible. I could see other white people becoming established in Zimbabwe and making a living, but the ways of the African economy were too mysterious for me.  I had hoped to buy farm property and grow some vegetables and manage a backpackers hostel near Matopos National Park. That was impossible. I wanted to go home.

"Do you want to come to America?"

This is the full extent of the conversation we had on this topic. It was typical, in our relationship, to have very short and compact dialogs. She spoke English poorly and she had no patience to teach me her language of Ndebele. And she had the very attractive quality of getting right to the point. She said yes because that's what she meant.

This was a woman who would go shopping in five minutes. Like walk into a store -- this actually happened and I saw it -- walk over to the dress rack, spend about 30 seconds scanning up and down, and then say "I'll take this one."

But we have more to say about elephants. The next post will feature the marriage of Mr. and Mrs. Elephant.

Also, at a later date, we will answer questions white people have about African hair.