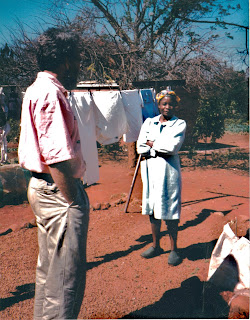 In an effort to improve race relations I moved to Africa in 1997 and married a black woman.

I married her. She married me. We got married. Hitched, by a Justice of the Peace, in the city of Bulawayo, in the province of Matebeleland, in the country of Zimbabwe, in far away Africa.

The civil ceremony was attended by the bride's grandfather, Mr. Mataka, and the bride's cousin, Tanti. The groom was joined by Lieutenant Jones of the Zimbabwe Army who served as best man. A large reception was hosted at the bridal couple's rented home after the ceremony.

I will post photos of the ceremony later. But we did get married, legally, in Zimbabwe, which is recognized by the United States as valid, and equal to any marriage in this country.

We made an effort to improve race relations, but it never got any better -- never got any worse either. Look at this photo. The wife is not too happy about being photographed in her morning dress. Or perhaps she is just being her naturally defiant self -- arms crossed, glaring, with a trace of a smile.

Now look at her slippers, soft blue slippers, much too large for her feet. Those aren't her slippers, they are his. She is wearing his slippers because they are married and that is what married people do.

He is standing there with his hands in his pockets, unsympathetic. The Great White Hunter, looking for big game, but likely to find only a field mouse scampering under the drying laundry.

Who do you think washed the clothes  and hung them to dry? I don't think he did it, although he might have "helped."

He came to Africa looking for cheap housekeeping. Did he? She married him because he was rich. Did she? They never loved each other. Except ..... this is only a small thing .. she is wearing his slippers and that is a sweet and tender thing and there was something real about how they felt toward one another....
Posted by Fred Owens at 3:15 PM