Waiting for the Bus 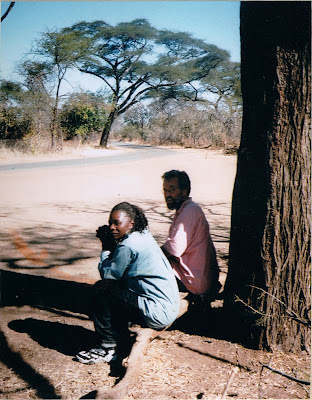 Waiting for the Bus

This photo illuminates my experience about Africa. It looks like we were waiting for the bus. We were not. We were looking across the road at the world's largest baobab tree, located near Victoria Falls and discovered, that is, first brought to the world's attention, by the explorer David Livingstone, whose statue, alone among all colonialists, still stands in Zimbabwe.

Whatever you see or hear or think you know about Africa is probably not true. They are such liars. People told me almost anything.

Then she said she loved me... And did not love me?

Everybody spoke three or four languages -- at the same time  -- and belonged to five or six tribes. "We hate those Shona people, they are killers and thieves, except for Mr. Dhlawayu who married our sister. He is a fine fellow."

Yes. What time does the bus get here? Yes. No. There is no bus, so  it is hard to tell when it will come.  Once there was a bus ...... but that sounds like a story.
And I have already heard too many stories, I want the facts. Facts. Facts. Something solid to hold on to, something dependable, something that will stay put. Facts. Can I have just one -- please -- just one fact?

There are no facts in Africa. There is no bus. It will never come and there is no baobab tree. And those two people sitting on the log  are whoever you want them to be.

Except for the sun. The sun is so much more than a fact. The sun rises and sets all over the world, but the sun lives in Africa. Home. God. Sun.

See the photo. You see sunlight and shadow.  The sun is something you can count on. It is real. The rest of  is imaginary. People come and go. Trees sprout from seeds and die. Animals eat and are eaten. But you can't be sure of anything. You can't trust the people and you can't trust your own senses.

I saw that! But are you sure? Look again. Keep looking.