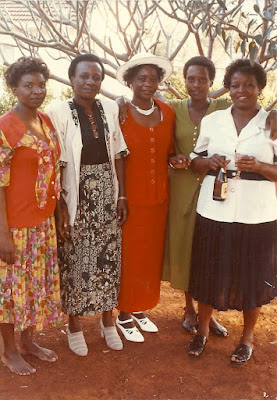 Too many beautiful women. I will tell you about this some other time -- who they are and why they are gathered under the pepper tree at our house on Shottery Crescent.  But it relates to today's topic, the African National Anthem, because this is their song.

This moving rendition is sung by Paul Simon, Ladysmith and Miriam Makeba.

I searched the Internet high and low for the lyrics and translation, but I could not locate them. Perhaps it is better to simply meditate on the opening line -- God Bless Africa -- yes, may God Bless Africa  -- Nkosi Sikelele Africa.

A man with an orderly mind might question this phrase -- "African National Anthem."  This orderly man would ask, "Africa is not a nation, so how can it have a national anthem?"

I can explain this. Of course Africa is a continent composed of many nations, but the idea of a nation, firm and compact within its borders, with a certain culture and language distinct from other nations -- this notion is somewhat foreign to Africa. It might seem confusing to the orderly man. Surely it was confusing to me.

When I met Precious and her friend Nellie one evening in February of 1997, in the patio of the Palace Hotel in Bulawayo, Zimbabwe, and she told me her name was Precious, I was amazed at her forthright beauty and dazzling smile. But I am a man of a restrained and modest nature. Precious, as a name, seemed so over the top  -- I almost blushed.

In time I found out she had other names, at least two that I knew of. She showed me her two passports. One from Zimbabwe that gave her name as Precious Sibanda, born in 1967. The other passport was from Malawi and said her name was Precious Mataka, born in 1971.

This was not orderly. This was fantastic.To my credit, I never asked her what was her real name. "But, what is your real name?"  People with questions like that don't last long in Africa. That is like asking "What time does the bus get here?"

You just have to go with it. And sing with gusto, "God Bless Africa, Nkosi Sikelele Africa,"  the words of the African National Anthem.