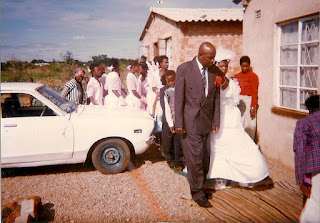 The Wedding of Mr. and Mrs. Elephant

Their name is Ndlovu which means elephant. This is their wedding portrait on that special day in 1997 -- Mr. and Mrs. Elephant.

Commonly in Ndebele culture people have the names of animals, so you will meet Mr. Monkey, Mr. Cow and so forth.

You see the woman in the red blouse -- that is Precious, a cousin of the newlyweds. You see the the bridesmaids in procession in their rented gowns. I had seen them at the hall rehearsing their wedding dances the day before.

Amina was one of the bridesmaids. She has a half-sister to Precious, having the same father, but a different mother, as Precious's father seemed to go through wives rather quickly.   Amina's mother was a Tonga woman and the Tonga people from the Zambezi Valley are the blackest people of Zimbabwe, black as coal, black as midnight, black as velvet, a richness of pigment and a poverty of soil. The Tonga people are very poor in their hot country where the rain is scarce and the corn grows scarcely.

Amina was blacker than Precious, and younger and not as pretty. I liked her a lot because she was easy to be with.... Precious was the oldest of her brothers and sisters and the oldest of her cousins being the first born of her father who was the first born of her grandfather..... it gets complicated... she was related to the Ndlovus in some way..... After a while I just called them all cousins.... and they called me umkunyani which means son-in-law or "he who pays for everything."

I have to explain that in another post --  the lobola -- how a man pays for his bride.

Back to Mr. and Mrs. Elephant on their special day, seen here in procession in the township of Nketa Nine, at the home of our Uncle Smiley and his wife, Mamazala.

The blessed couple had six children and had been living together for 12 years, but the government had launched a new program of giving low interest mortgage loans to married couples. This program prompted the ceremony. Mrs. Elephant  would have her dignity at last and well deserved too, you would admit. She would have her proper home and she would have a proper wedding, complete with gown,  bridesmaids, cake and wedding feast.

Mr. Ndlovu had approached me several days before the wedding.  Would I give him a ride to Filabusi in my truck to pick up the the meat for the wedding feast? -- they had slaughtered a cow, he said.

Of course, I said, knowing it took an hour to get to Filabusi, and this being Africa, the arrangements of picking up the meat might take most of the day.

"So the beef is ready to be delivered?" I asked. He hesitated, looking at his feet, well, they have not yet slaughtered the cow.

Oh boy, this will be a long day, to find the cow, slaughter the cow, load the beef in the back of the truck and deliver it somewhere -- had Mr. Ndlovu arranged a cooler to store the beef?

Not exactly. In fact, he kind of wondered if I could loan him the money to buy the cow -- please?

Go the Barclay's Bank, withdraw enough cash to buy a cow, drive to Filabusi, find someone who wants to sell a cow, negotiate a price, then slaughter the cow, load the beef, drive back to Bulawayo, and arrange for storage in a cooler.

That was too much for me. I knew he had a job as a heavy equipment operator and was not poor, but he had spent all his money to rent the hall, and rent the bridal gowns, and buy the cake and other things. He had no funds for the beef.

I think I gave him the money in my pocket and wished him the very best.

But there was no beef at the wedding. Look at the photo again. notice the bowed head and sheepish expression on Mr. Ndlovu's face. Notice the fierce anger of Mrs. Ndlovu. No beef, and the meat of the cow is everything in Zimbabwe. The cow is prized above all other animals.

I wanted to laugh, but it was too sad. I took this photo from where I was sitting -- I had brought two chairs out to the yard to sit in the shade -- one for me and one for Mr. Mataka, the grandfather.

Mr. Mataka, approaching 80 years, was a happy man and always smiling. But this one and only time he was angry and he did not smile. "There is no food!" he said.

But, to my knowledge, Mr. and Mrs. Elephant got their mortgage and got their home and maybe they are happy together today, 18 years later.

I feel rich and thankful that my memory recalls so many of the details of this wonderful day in 1997.