Attacked by a Mouse 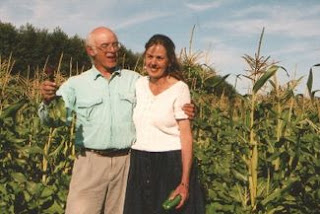 Glenn Johnson is not a pacifist. "If I was ever attacked by a mouse, I would defend myself, no question," he said.

Glenn farms 40 acres of choice bottom land on Fir Island, organically. No pesticides or herbicides, and he hasn't used them in 15 years. So he has to use his wits to outwit the field mice that live on his farm (or he lives on their farm, as the mice no doubt believe).

"I finally figured out how stop the mice from eating the squash. I do that by planting beets and squash together, a row of beets, then a row of squash."

Glenn showed me where the mice nibble the squash. "The little buggers don't eat the squash, they just take a little bite out of each one, then the next one, and the next, always leaving these little scars on the squash and then I can't sell them. But the mice would rather eat the beets, because their softer."

He showed me where the mice ate the beet – it was more than half eaten. So they eat the whole beet, but just one, and leave the rest alone, and stay away from the squash.

Yes, Glenn has to be thinking every day out there in the field, always working on a strategy, always carefully guarding his ultra-thin profit margin. You have to be smart to be a farmer.

Glenn has run for public office several times, but has not yet gotten elected. His political stance is straightforward He says that if he is elected President he will run the country just the way he runs his small organic farm. He will defend himself as a last resort, if the mice ever stage an armed attack, but mainly he will simply work to his own advantage, figuring that he can outsmart a rodent six days out of seven.
Posted by Fred Owens at 5:31 PM