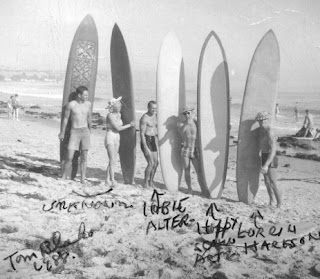 I called my sister in Los Angeles this morning. "We are surrounded by tragedy," she said, describing the ring of fire in the hills around Los Angeles and San Diego. "But it's weird too, because the wind isn't blowing here at all in Venice, just a brown haze in the sky from the smoke of the fires."

My sister lives in Venice, near the beach and 8 miles from the nearest fire at Malibu Canyon. The Santa Ana wind blows hot and dry every autumn.The humidity drops to almost zero and the ultra-dry wind makes everyone a little crazy, whether there is a fire or not.

Scientists at the Jet Propulsion Laboratory in Pasadena have described one beneficial aspect to this fierce offshore wind. The hot wind comes over the mountains and on to the ocean, and stirs up the water, causing colder, nutrient-rich water to rise to the surface -- it makes more food for the fishes, in other words.

Another good effect of the Santa Ana wind, is that it shapes the waves nicely at Malibu Point, one of the best and most famous surfing spots in Southern California.

During the peak of the wild fires yesterday, I cruised the Internet and tuned into the Surf Cam that is trained on the Malibu Point break. It was fine. There were only a half dozen surfers on the water yesterday, when there would usually be more than 50.

So, wild fire or not, when the surf is up, you gotta go.

I'm not being glib about the massive destruction of these terrible fires. I am just pointing out that surfing is the soul and essence of Southern California culture.

I have spent many delightful hours sitting on the sand at Malibu, watching them ride the waves. And someday, with a little help and a little coaxing, I'll get out there myself.

That's why I checked the Surf Cam at the height of the disaster -- Now I know everything will be all right again.

The surfing photo was taken at Malibu in 1949. They used really big boards back then.
Posted by Fred Owens at 4:20 PM