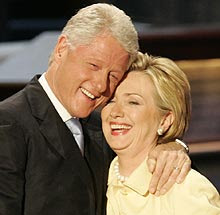 The pre-eminent power couple in the land is Bill and Hillary Clinton. I so strongly wish they would retire -- don't they have a ranch somewhere? like the Reagans did, or like George Bush does -- I can't wait for him to retire too.

I will not vote for Hillary, and I very much hope she is not elected -- primarily because "they" will return to the White House. The Clintons are addicted to supreme power and they can't let go.

In the new "classless" America, since we destroyed the middle class -- and I regret to say that I had a major role to play in that destruction -- but in the new order, we have power couples -- such as Bill and Hillary -- he's a lawyer and ex-President, she's a lawyer and US Senator.

And every power couple is matched by a powerless couple, call them Ted and Beatrice. Beatrice works swing shift at a convenience store, and Ted works construction, which used to pay well before illegal immigration trashed that occupation.

But Bill and Hillary are just folks, not the kind to put on airs -- I'm not being ironic here -- they truly do not act fancy. But they are all about power, keeping it and wielding it.

The Owens family could use more power, so could our fictional Ted and Beatrice, and we will attain more power, by opposing the Clintons.
Posted by Fred Owens at 5:35 PM