When the King of Sweden Came to Kansas 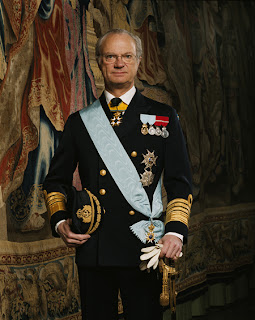 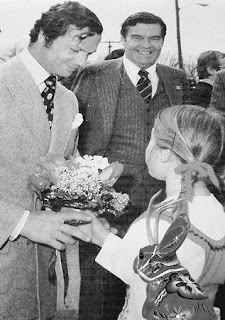 Who can for get that wonderful day when King Carl XVI of Sweden came to Lindsborg, Kansas in 1976. That's him on the left receiving a bouquet of flower from a little Kansas girl. And that's him on the right, as he looks today.

King Carl, like me, was born in 1946, and, also like me, he visited Lindsborg, Kansas, but I got there a few months after his trip, and they didn't bring me flowers.

What happened is my International Pickup, truly the worst vehicle I ever owned, broke down on the verge of Lindsborg, and I was forced to a camp ground on the nearby Smoky Hill River.

What could I do? I was broke, I had to get a job. Thankfully, Lindsborg was a wonderfully tidy town founded by Swedish immigrants -- that would explain the King's visit -- so they had a factory to provide employment.

The factory made aluminum windows for the booming housing market in Wichita, 40 miles down the road.

I got a job at that factory, on the assembly line, cutting glass to fit into the window frames. I had to work very fast to keep up with the line. An empty aluminum frame would come by on the belt. I would grab it and place it on a table, I would then grab a pane of glass, place it over the frame, make two quick cuts with a glass cutter, drop the glass into the frame, and then put it back on the moving belt. I broke a lot of glass, but they didn't care as long as I worked really fast.

And it was awful hot, over 100 degrees every day -- that's August in Kansas.

It wasn't any plan of mine to live in Lindsborg but, as I said, my truck broke down, and it wasn't a bad place.

We rented an apartment in the alley in back of a Swedish bakery which smelled like cinnamon.

Those Swedes really know how to take care of themselves. They had a program of complete independence, with graceful amenities and cleanliness -- a four-year liberal arts college, a beautiful park with a summer bandstand, a grand municipal swimming pool, and their own power plant to provide their own electricity.

It was an agricultural center as well, but you would expect that in Kansas. Then there was the factory -- to get those kinds of jobs.

On top of all that, they had removed all the buildings from the Swedish Exhibit at the St Louis World's Fair in 1904.They re-established these historic buildings in a city park, and made it a tourist attraction.

And then the King of Sweden came, to visit all his Swedish-American children.

King Carl went back to Sweden to resume his normal job of handing out the Nobel Prizes. I left Lindsborg a few months later, I got my pickup repaired, I had a little money by then -- I got really tired of working on the assembly line at the aluminum window factory, but it was a good town. At least I had the luck to break down in the right places.
Posted by Fred Owens at 3:38 PM