Notes on a culture 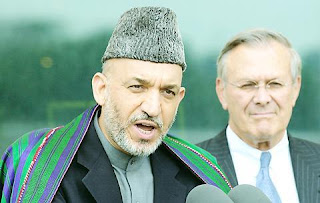 Former Secretary of Defense Donald Rumsfeld is also a pretty sharp dresser. We should have never invaded Iraq, and since we did, we should never have let Rumsfeld design the strategy -- but he did look good in a suit.

** Conceptual artist Bobby Vilinksy, featured in a post several days ago, will be hosting a show at his Waltham, Massachusetts studio. It will be a group show in this cooperatively shared space. Waltham, a suburb of Boston, was one of the first industrial cities in America. In the early 19th century textile mills, powered by dams on the Charles River, employed thousands of men and women in Waltham.

The old brick buildings are still there and Vilinsky works in one of them. In a few days, Frog Hospital will post photos of his art, so stay tuned.

** Al Gore jumped in line again. If a Nobel Peace Prize is given to a man who has worked to save and improve the environment, it should have gone to agricultural essayist Wendell Berry. Berry's work -- his written words and his small farm in Kentucky -- form a true and wholesome integrity. In the Jewish prayer book, it says, "Blessed is He who says and does..." --- that's Wendell Berry. Compared to him, Al Gore is just another grandstander.

** The Salvation of the Nation will come from Iowa. Read all about the "Corn Renaissance" in the next post.
Posted by Fred Owens at 12:38 PM