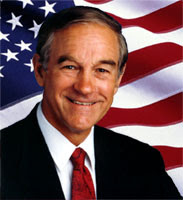 I endorse two inconsistent positions on health care. One, I support Ron Paul for President. He is an obstetrician from Texas, representing a Congressional district in the hot, swampy Gulf Coast region, including the blissful town of Anahuac, where I once lived, in 1986. Be that as it may, he takes a conservative view that the federal gov't. should not get involved with health care because they will do it badly. He says that the more complicated the issue is, the more it needs to be locally decided. Being a strict constitutionalist, Dr. Paul has no objection to state solutions to health care.

I also support columnist Froma Harrop's appeal for universal national health care, as she describes it in the column in the previous post.

I suppose these two views are inconsistent, so what I mean is, one way or the other, let get 'er done.

And no, I don't care what they do in any other country. They can do whatever they want in Canada and in Europe. The solution to American health problems will never be imported, it has to be home-grown and grass roots.
Posted by Fred Owens at 11:09 AM