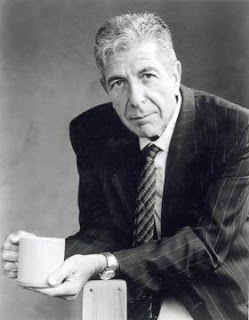 I thought my previous post with a photo of Hank Williams might be too rednecky. I have a CD of Hank's Greatest Hits, which I enjoy, but than I get tired of that Alabama twang.

I also greatly admire the songs of Leonard Cohen, a Jew from Montreal who practices Buddhism in the mountains near Los Angeles. He might have seen the fires burning near the monastery where he often goes to pray and meditate. Then he would say something profound, such as "Fires burn, and burn again. The mountain is down in ashes."

The fire is real and terrible -- and a complex poetic metaphor as well. Cohen would love to see it, as much as seeing an ant walk across his knee.

And he would never say that Hank Williams music was too rednecky. He would say that he enjoyed listening to it, and that Hank's song have inspired his own work.
Posted by Fred Owens at 12:08 PM

WHy do you spam people who have never asked to be on your distribution lists?

I have asked repeatedly to be removed, and yet you ignore my requests.