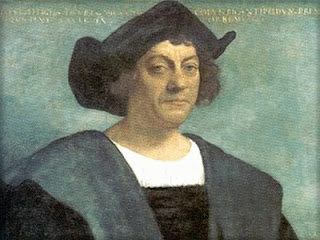 Let us revile the memory of this supposed Discoverer. Let us question the sanity of our foreparents who made this day a holiday. For Christopher Columbus was a very bad man, his crimes innumerable, and his vices legion.

He was a pronounced Catholic bigot with no respect for other religious traditions, counting Moslems as heretics, and Native Americans as devil worshipping heathens.

He was in league with the supreme anti-Semites of his day, King Ferdinand and Queen Isabella, who sponsored his brutal voyage of conquest and cruelty. The Spanish monarchs had only recently expelled all Moslems from the Iberian Peninsula, and were about to launch the Inquisition, to torture, evict, or convert the Jews who had lived in Spain for centuries.

Christopher Columbus was also a male chauvinist and despicable sexist. Staffing, "manning," he would have said, his three vessels, he insisted that not a single female be recruited, going so far as to say, with no apology, that it was bad luck to have a woman on board.

As leader of this pestilential fleet, Columbus assumed dictatorial powers, never once consulting his crew, or even his mates, but making all decisions himself. There was no vote, there was no consensus. To disobey the orders of this tyrant meant the lash.

Furthermore, besides being a bad man, Columbus was profoundly stupid. Discoverer? Pah! He was lost. he thought he was in China.

It is important to mention these crimes, alongside with his well-known role as enslaver and killer of Native American peoples.

We, his descendents, especially those of us from Italy, where Columbus was born, can only consider ourselves to be the evil spawn of this malignant monster.

It is entirely appropriate that this most awful day in human history, October 12, be a day of mourning, ashes and weeping.

It was all wrong, and everything that happened since then was wrong -- truly there is an Original Sin, but it was not Adam and Eve, but Christopher Columbus, who destroyed the Garden of Eden that was once America.

(Only we need to call it something else besides America, which comes from the name of a self-promoting mapmaker, Amerigo Vespucci -- another one of those damned Italians.)
Posted by Fred Owens at 11:17 AM

Christopher Columbus was my father. i'm very insulted by your accusations.

Yes Christopher Columbus was a very very bad man.I know he killed many innocent people just for fun.
When he discovered the Islands ,he tortured the tribal people over there.Just for fun he binds the tribal people with dry hay and set fire on them and enjoyed the sight when they ran for life shouting like anything.THAT BASTARD.
(zenthilkane@yahoo.co.in)

he was my sister!

Glen Arval Spivey from Texas is part Native American due to Vann. It is possible his ancestors will accuse Columbus of the crimes against humanity.

Yes he was horrible. But how you could point out how he was sexist in that time period that he was around is rediculous. OF COURSE he was sexist. In that time period just about everyone was. Non-sexist thinking is a relitively new thing, as a matter of fact, some people STILL haven't accepted the idea of both sexes being equal.
As for the Catholic bigot thing, you are insulting an entire religion with that comment at the same time as trying to say that we should respect all religions. Quite ironic, huh? And once again, at that time period everyone who was Christian believed that, which made up most, if not all, of Europe. As for King Ferdinand and Queen Isabella, he only went to them because he was desperate, because, as you said, he was stupid. Most people knew that he was wrong about the size of the world, mathmeticians knowing that he would fail to reach Asia. And ,as captain in those days, he WAS ENTITLED to dictatorial rights. That is what it meant for captain and crew of those days. You cannot look at things from your view from today. And no. He didn't think he was in China. He thought he was in India. Thus Native Americans are thought of as "Indians" even today. As for Adam and Eve comment. Adam and Eve didn't destroy the Garden of Eden. Adam and Eve cause the ban of themselves from the Garden of Eden with a sword that reaches in all directions barring their way out. Also, Columbus didn't even touch America, north or south. He reached islands near America.
I would also like to say, though you are right about him being stupid, that isn't the reason that he was not a discoverer. Someone can discover something and be still be stupid, thus being a discoverer, no, the reason that he wasn't a discoverer is because he was not the first person to reach that area, because the Native Americans had already reached that area because of the Land Bridge that existed during the Ice Age. However, in terms of Europe, he WAS a discoverer to the Europeans. He found something that they didn't know was there. You must realize, however, that you haven't even touched on the horrible things that Columbus has done. If you will research, you will find that he actaully enslaved the Arawaks after they had given him gifts and greeted him kindly. They were good and kind, and would give anything that he asked for to him freely, but that wasn't enough, he forced them to give more, even their very lives. Sorry to correct you so much, but the way you talked, it didn't seem like you liked inaccuracy ;)

richard nixon made the holiday officail

1. he wasnt even the first in north america and that is disrespectful for the native americans cause they were there first

3. after the native americans saved him and welcomed him warmly he took advantage of them

Orville Orhel Nix is part Native American and his ancestors will accuse Columbus of cruelty against humanity!

if he did all every thing u say well levae hes dead body alone now what done is done you can't chagne notthing. yes his a bad man for he done god chsoe hell or havean. Ok

wow whoever wrote this page is fucking stupid. its way inaccurate, he didnt think he was in china you dumbass. he thopught he had found india

What is this about Italians??? ITALIANS DAMN ROCK!!!!!!! I don't know were you are from, but I'm sure a lot of dumb people come from there as well.

I share a love/hate relationship with digital memory because of how prices are always falling. I hate buying Micro SD Cards for my R4 / R4i at (what seems to be) a crazy bargain price only to see it become a whole lot more cheaper a couple of months later.

He did not think he was in China, he thought he was in India and that is how native americans were stupidly called "Indians." And even today everyone calls them Indians and it's retarded because they are not Indian. People born in India are Indians and Native Americans are Native Americans. It is all thanks to this idiot that they are called Indians today.

You realize that Columbus thought that he was in Asia not China.